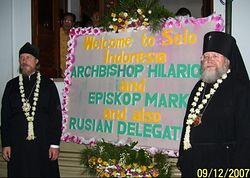 Metropolitan Hilarion and Bishop Mark make a visit to Indonesia
Jakarta, Indonesia- Metropolitan Hilarion (Kapral) of Eastern America and New York, First Hierarch of the Russian Orthodox Church Outside Russia (ROCOR) Archbishop of Australia and New Zealand arrived in Indonesia today and served a liturgy in Jakarta were he ordained 2 Indonesians deacons to the Priesthood. During the course of his visit to Indonesia His Eminence will ordain 4 priests and 1 deacon. In the ROCOR mission of Indonesia there are already over 2500 Indonesian Orthodox parishioners. The Dean of the Indonesian Orthodox mission Archimandrite Daniel Byantoro held a press-conference with www.pravoslavie.ru to describe the difficult situation in the rapidly expanding Orthodox mission in Indonesia. 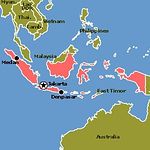 Indonesia
“If there is a Russian Orthodox Theological Institution in Moscow who can teach our parishioners and newly ordained clergymen to preach Orthodoxy in the Indonesian language we urge you to establish a branch of your seminary in Indonesia. Many Indonesians will come to learn and obtain a degree in Theology. Our people want to be educated by the Russian Orthodox Church in the Orthodox faith. We do not have the capabilities to send our clergymen overseas to be obtain a theological education in the Russian Church. Also, Indonesians who are not Orthodox are attracted by the prospect of a higher educated with a degree. Through their education in a Theological Institute they will come to the Orthodox faith.”

Discrimination of Orthodox Christians in Indonesia 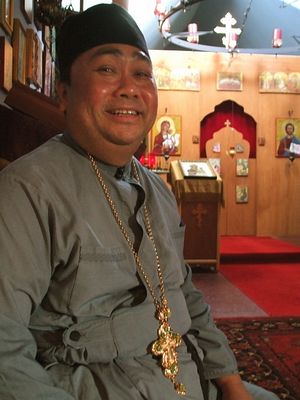 Founder of the Indonesian Orthodox Church - Archimandrite Daniel
To hold a church service the Fr. Daniel must gather signatures from at least 16 Moslem neighbors who are over the age of 19 years old. Fr. Daniel is constantly denied permission because citizens are against the presence of a Christian Church in their area. The same rule applies to other Christian denominations in the area. Some Orthodox and Catholic parishes in the area coordinate their activities and help each other in response of the Muslim majority. Some places are tolerant and open but some areas of Indonesia are very hard line Muslim. The Orthodox avoid those areas as it is dangerous for them to openly practice missionary activities. Fr. Daniel says that from time to time organized violence occurs against Orthodox Christians and it is hard to predict when and where. The Orthodox community in Indonesia lives in constant fear and discrimination. When Fr. Daniel opened the Orthodox mission in Indonesia there were many problems with the Indonesian police. Since he has joined the ROCOR the situation with the local administration has improved but Fr. Daniel states that “the police are not afraid of anything, they don’t care about anyone or anything”. Whenever his Eminence Metropolitan Hilarion visits his flock in Indonesia Fr. Daniel is required to report to the authorities that he is receiving a foreign guest for religious purposes. The police escort the Metropolitan from the airport and keep a close eye on him. 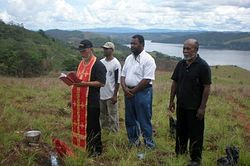 Orthodox Missionary work in Eastern Indonesia
Fr. Daniel travels to U.S.A every month and conducts fundraising activities amongst Orthodox Russians, Greeks, Serbs and Antiochians. The bulk of the financial aid that the Indonesia Orthodox Church receives is from donors in the U.S.A. In 2007 through the efforts of His Grace Bishop Mark of Egorievsk organized a link between the Orthodox Community in Indonesia and the Russian Orthodox Church of the Moscow Patriachate. As a result of these ties Moscow supplements the wages of the Indonesian clergy but Fr. Daniel says that this is minimal and not enough- “The help is not enough, not all of the priests receive help”. For Orthodox priests in Indonesia it is very difficult to live, being such a strict Islamic country the Orthodox clergy cannot and will not be employed by anybody. Indonesia is the largest Islamic country in the world and the Orthodox clergy are heavily discriminated against. 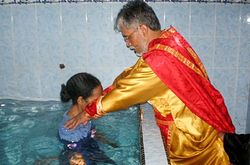 Orthodox Baptism in Papua
Projects of the Indonesian Mission

The Orthodox Church in Indonesia needs financial help to continue printing Orthodox literature, buying land and building churches. Fr Daniel quotes, “The possibilities for the growth of Orthodoxy in Indonesia are huge, for a small investment into missionary work; the returns are evident through the large number of Indonesians converting to the Orthodox Church.”

The Indonesian Orthodox People love the shepherd of their spiritual flock 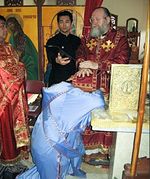 Pascha in the Indonesian Orthodox Church

Pascha in the Indonesian Orthodox Church
Fr. Yohannes Bambang Cahyo Wicaksono gave his report of the Paschal celebrations in his church in Surabaya, Indonesia, (Ecumenical Patriarchate).