A Сonversation with two Orthodox Turks, Achmet and Nejla 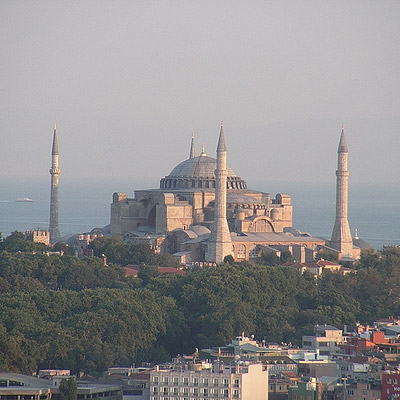 Agia Sophia. Constantinipole
In Turkey, which is the canonical territory of the Patriarchate of Constantinople, there are very few Greek parishioners left. The Orthodox community has been supplemented to some degree by Russians who have taken up permanent residence there. However, there are also some Turks who have become Orthodox in the Patriarchate. Lately their numbers have grown. Orthodox literature is being printed for them in Turkish, and articles about the newly-converted are being published. Achmet and Nejla are two of the thousand or so Turks who have changed their faith; and unlike others, they do not hide this at all. They related their stories to one Bulgarian website, “Dveri na Pravoslavieto”—their spiritual searches which led them to Orthodoxy, and what it means to be a Christian in Turkey. We offer the text of this conversation to the readers of Pravoslavie.ru.

—The Turkish press explains the current numbers of Baptisms in their country as a “return to their own roots” by Turkish citizens of Greek or Armenian extraction. Did your own nationalities play a decisive role in your conversion to Christianity?

Achmet: Ethnic origin has played a role in some cases, but not in ours. I myself was born in Cappadocia, and I have relatives who came from the Caucasus. As far as I know, I have no Christians in my family background. Joining the Orthodox Church was the result of my own personal choice.

Nejla: My mother is from Kavala, and my father is a Pontian. Some people in my family speak Romeian (the local Greek dialect spoken among the islamacized population. –Y. Maximov). But the decision to leave Islam and become Orthodox was my own personal choice, regardless of my origins.

—Historically, Turkish identity was so tightly bound with Islam that many Turks are completely unable to accept the idea that it is possible to be a Turk without being a Moslem. How do you view this?

N.: It’s true, many people do not consider you a “Turk” if you confess a different religion; especially if you are a Christian or a Jew. They think that you not only belong to another religion, but to another nationality.

A.: This can be explained by historical causes. The Ottoman order divided ethnic groups into millets along religious lines. For example, all the Orthodox comprised an “Orthodox ethnos,” and the administration did not assign any meaning to their nationality, be it Bulgarian, Serbian, or Greek. In Cappadocia, where I come from, religion was what divided inhabitants between Romeians and Turks. The Orthodox people in the state of Talas, my native land, spoke Turkish as their native language, and even served the Liturgy in Turkish. But their membership in the Orthodox Church is what categorized them as the “Romeian people.”

Just the same, Turkish history knows other, excellent examples. In the past, in various parts of the Turkish diaspora, Turkish communities accepted Christianity. There are Christian Turks in Central Asia, there are the Orthodox Gagauzians,[1] and there are thousands of Turks who have become Christian in Turkey. That they are Christian does not mean that they are not Turks. I am also a Christian now, but I am also one hundred percent Turkish, and Turkish is my native language. So, this division of people according to religious orientation is becoming more and more outdated. People are still surprised when they hear that one or another Turk is a Christian, but little-by-little, this is becoming more normal.

—What is your occupation?

N.: I am a dietician, and I do volunteer work.

A.: I was a manager in a large government company, and lived for a while in the United States. Later, I had a business in Belgium.

—Achmet, probably your desire to become a Christian arose while you were living and working in a Christian country?

A.: No, the ground had been cultivated much earlier. Unfortunately, Christianity in Turkey is viewed as something that comes from the “outside.” This is a mistake, because Orthodoxy is a part of our land’s history. This can be seen from the privileges that Mehmet the Conqueror gave to the Constantinople Patriarchate.

I had some idea of Christianity from childhood, although it was through the prism of Islam. Many Moslems have great respect for Christians, which is bound up with the fact that the Koran accepts Jesus as a prophet. In general, Moslems also respect the Most Holy Mother of God. I think that you have seen the crowds of faithful Moslems who gather in the Romeian churches of Istanbul in order to venerate the holy shrines, and ask for help. In Turkey, we are prepared to accept the message of Christianity.

If there are problems, they are bound up with the education that both sides receive, and with ignorance. For example, many Moslems do not understand the meaning of the teaching on the Holy Trinity and think that we worship three gods, and that Christianity is a political religion. I do not say this as a criticism of Islam, but only present the fact as an example to show how uninformed they are.

—Nejla, did your search also begin in Turkey?

N.: Yes, when I was studying in the university. My family was on the whole religious, but without following all the precepts of Islam to the letter. I considered myself a Moslem until I began to distance myself from Islam during my studies in Ankara. My parents allowed me the freedom to decide my relationship to religion. While I was in Islam, I felt an emptiness that demanded fulfillment. I read, and searched. I entered upon a path that led me to Orthodoxy.

—It would follow that your path to Orthodoxy was the result of “local” experience, without any influence from outside of Turkey?

A.: Any influence from American or European Christianity can only do harm. I never felt comfortable with the Christians there. They repelled me from Christianity by turning it into psychotherapy. They go to church on Sundays to talk. However, religion has an aim of filling a certain other emptiness. In Europe, Christianity has been relegated to holidays without any connection to religion. Take the Nativity of Christ, for example. Many people greet each other with the words, “Happy holidays,” instead of Happy Nativity.” In Europe, people have a superficial connection to Christianity, without an understanding of its spiritual meaning.

—How do the Christians in your country differ from Europeans?

N.: In that they are much closer to the essence and traditions of Christianity.

A.: And in that they are more religious.

N.: We go to church every Sunday, read the Holy Scriptures every evening, pray together, and strive to fulfill all the demands of our religion.

—Are you in contact with the local Orthodox community?

A.: We are in close contact, because we are in church every Sunday. There are many nice people in the Romeian community, and we have found friends. Every person has something to share with us. Liturgy is served in various churches. We often visit the church in Nihori. Lakas Vingas, the president of the community, lets us say the “Our Father” in Turkish.

N.: Yes, I read for the Turkish-speaking people (she laughs).

—Is it hard for you to follow the services when they are in Greek?

A.: We prepare for each service at home. We also have a dual-language New Testament, so that we can follow the service using the Turkish text. It is important to understand in order to participate.

—The tragic schism of Fr. Euphemios from the Constantinople Patriarchate in the 1920’s and the founding of the schismatic “Turkish Orthodox Church”[2] made it much more difficult to introduce the Turkish language into the parishes of Constantinople, although this has been done long ago by other Christian denominations.

A.: Yes, that is so. We hope that with time there will be services in the Orthodox Church in the Turkish language. Today, only the Symbol of Faith is read in Turkish. It is also necessary that the problem with Fr. Efthimiou’s successors be resolved—there can’t be enmity between the Churches. All the Orthodox in Turkey should be under the Ecumenical Patriarchate.

—Have you encountered any negative reactions from people in your society after you were baptized? Does anyone harass you?

A.: I have not experienced anything negative and I can’t say that I have been harassed.

N.: I have not met with any negative reactions. My family was surprised, but they respect my choice.

—Do you consider that there are many others who would follow your example and convert to Christianity?

—Nevertheless, so far very few have been baptized.

A.: Yes, there is fear. But this should change, just as the attitudes in society toward those who change their religion should change. In any case, the Orthodox Church does not proselytize. To the contrary, there are strict requirements demanded of those who want to come in from another faith. These people have to go through a long catechism, and their sincerity is tested.

—Does that mean that it is not easy to enter the Orthodox Church?

N.: Yes, in past years, but we really pressed for it.

—Do the attacks against Christians, like for example the murder of the Catholic priest, Fr. Santoro, in Trabzond, and the killing of Christians in Malatya make you fearful? Who do you think is behind these attacks?

A.: I do not think that something like that could happen in the capital. The country is visibly changing as the talks concerning the acceptance of Turkey into the European Union continue. Turks are becoming more open and tolerant. Naturally, however, certain radical groups are reacting to these changes. These are dark forces who have nothing in common with the government, and are on the periphery of society.

[1] The Gagauz people descend from the SeljukTurks that settled in Dobruja, together with the Pechenegs, Uz (Oghuz) and Cuman (Kipchak) people that followed the Anatolian SeljukSultanIzzeddin Keykavus II (1236–76). More specifically, one clan of Oghuz Turks migrated to the Balkans during the inter-tribal conflicts with other Turks. This Oghuz Turk clan converted from Islam to Orthodox Christianity after settling in the Eastern Balkans (in Bulgaria) and were called Gagauz Turks. A large group of the Gagauz later left Bulgaria and settled in southern Bessarabia, along with a group of ethnic Bulgarians. — Trans., from, http://en.wikipedia.org/wiki/Gagauzia.

[2] The so-called “Turkish Orthodox Church” was begun during the war between Greece and Turkey, by a supporter of the Turkish nationalists named Pavlos Karahisarithis (he later changed his name to Zeki Erenerol). He formed a schismatic church (calling himself “Pope” Eftim (Efthimiou) with the backing of Kemal Ataturk, who used the group as a tool against the Greek population and the Ecumenical Patriarchate. The church has very few followers at present, and its spokeswoman, the granddaughter of Pope Eftim, was arrested in 2008 for alleged links with a Turkish nationalist underground organization. It was also suspected that the Turkish church served as headquarters for the organization. Number of Ethnic Yakuts Converting to Orthodoxy on the Increase
In the Yakutia Diocese more and more ethnic Yakuts are converting to the Orthodox faith. Yakutia is an extremely north region of Russian Federation.
×