Archangelsk Schoolchildren Participate in Archeology of the Northern Thebaid 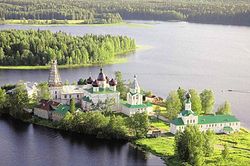 Monastery of St. Anthony of Siya
On June 25, 2010, an archeological expedition comprised of schoolchildren returned from the Monastery of St. Anthony of Siya. The Archangelsk high school students of School No. 9 received a blessing from Archimandrite Triphon last spring to participate in the excavations. This is the third expedition organized jointly between the municipal department of education and School No. 9, within the framework of a municipal experimental project to provide a spiritual and moral education to schoolchildren based upon Orthodox traditions, as the Archangelsk Diocesan press service reports.

The students' efforts were crowned with success: they were able almost independently to determine the location of and excavate about nine meters of the stone foundation of one of the walls of the Abbot's quarters.

The main result of the expedition, however, was the students' personal discovery of the holiness of the Russian North. They learned about the ancient monastery's history and its life today from the interesting and comprehensive tours given by Hieromonk George of the monastery. The children also had an opportunity to live the life of the monastery, observe its traditions, attend the services, and sample the simple but tasty food of the Apostles' fast.

St. Anthony of Siya Monastery was founded in 1520 by St. Anthony of Siya, on a small island in lake Mikhailov near the source of the Siya River (now Kholmogorsk region, Archangelsk Province). Its main church is dedicated to the Holy Trinity. Hendrix Students Travel to Kosovo for Mission Trip
Through a partnership with International Orthodox Christian Charities, students spent 10 days in Kosovo working to construct a youth recreation center with local Kosovar villagers and helping with infrastructure projects like drainage canals and freshwater wells. Bulgaria's Discoverer of St. John the Baptist's Relics, Kazimir Popkonstantinov: This is the Archaeology Find of an Epoch
We knew that because in this early stage of Christianity, after it was declared an official religion by the Byzantine Emperor Constantine, it was very likely to find one. People at that time used to put a reliquary with the relics of the patron, to whom a temple is dedicated, under the pillar of the alter table, when the temple is sanctified.
×