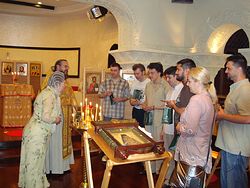 On June 1, 2010, the eve of the commemoration of St. John (Maximovitch) of Shanghai, the rector of the Orthodox community in Shanghai, Archpriest Alexei Kiselevich, served a moleben with an akathist in the St. Nicholas church to St. John.

Members of the Orthodox Community in Shanghai and guests from Orthodox countries attending the International exhibition, EXPO-2010, participated in the prayer service. Also present were representatives of local governmental institutions.

City authorities have given the Orthodox community the St. Nicholas Church for regular services during the period that EXPO-2010 will be running, since May 1 of this year. The creative group, "Balkonopolis" arrived at Shanghai for the Serbian Day of the EXPO. Paschal Epistle of St. John Maximovitch, 1940
St. John Maximovitch
The present night is not an ordinary night! Brighter than day, it illuminates our souls! The rays of the Sun of the world illumine us and the whole universe, enlightening all who come to His light.
×