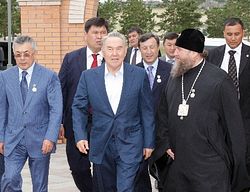 On July 2, 2010, the President of the Republic of Kazakhstan, Nursultan Abishevich Nazarbayev, visited the newly built St. Nicholas Cathedral in Temirtau, Kazakhstan, constructed at the government's initiative, reports Patriarchia.ru.

The honored guest was met by the head of the Metropolitanate in the Republic of Kazakhstan, Archbishop Alexander of Astanai and Alma-Ata, as well as by the secretary of the Diocesan council of Astanai, Archimandrite Gennady (Gogolev), and other members of the Kazakhstan Orthodox clergy.

The President and Archbishop Alexander looked over the new Cathedral. President Nazarbayev lit a candle for the prosperity of the people of Kazakhstan.

Vladyka Alexander expressed his heartfelt thanks to the President for his initiative in building the new church in this metallurgical city, and the diocesan choir sang "many years" to the country's president.

The President in turn awarded the Archbishop with a medal commemorating the fiftieth anniversary of "Kazakhstan Magnitka," invited him to the Astanai's seventieth anniversary celebration, and donated a new "Gazelle" truck to the cathedral.

President Nazarbayev congratulated the faithful with the important event, and expressed his conviction that this new church will aid in the spiritual rebirth, moral renewal, and strengthening of peace and mutual understanding in the multi-national and multi-confessional Republic of Kazakhstan. "Visiting Kazakhstan, I feel that this is an antimension under the open skies."
Archbishop Mark of Berlin, Marina Sazonova

"Visiting Kazakhstan, I feel that this is an antimension under the open skies."
Archbishop Mark of Berlin, Marina Sazonova
Visiting the expanses of Kazakhstan, I feel in my heart that this is truly an antimension under the open skies. Every populated place here is connected with the name of a New Martyr or Confessor, every kilometer of Kazakhstan soil was bathed with the blood of those suffering for Christ. Greek Orthodox hierarch visits Baikonur Cosmodrome
Metropolitan Nikolaos of Mesogaia and Laureotiki is on a visit to Russia with the blessing of His Holiness Patriarch Kirill of Moscow and All Russia and at the invitation of the “PONTOS” International Union of Greek Pubic Associations of the CID countries. The hierarch of the Greek Orthodox Church is accompanied by archpriest Grigoriy Pigalov, rector of the Church of the Most Holy Mother of God near Athens.
×