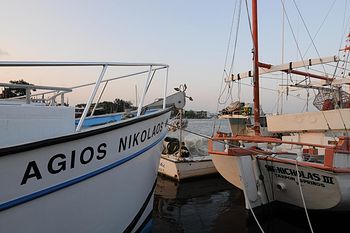 Tarpon Springs, on Florida's west coast, has the highest concentration of Greek-Americans in the US.

The first Greek immigrants arrived during the 1880s, when they were hired to work as divers in the growing sponge harvesting industry. The town now calls itself the sponge capital of the world. Building Musical Bridges in the Greek Orthodox Archdiocese
The speaker’s words stung, but they underscored for me the reality that there is a wide gulf between the choir loft and the psalterion that the current generation must address, and it is especially incumbent on those in positions of musical leadership to find ways of building the necessary bridges. Tarpon's Greek Orthodox church reaches needy, homeless, with food and health care
Hosting a soup kitchen is a natural for a church, said the cathedral's new assistant priest, Father Gregory Trakas. "That's what the Lord told us to do," he said, "and we have to be obedient to that command."