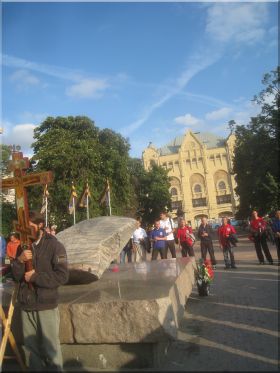 A cross made of clouds appeared for several minutes in the sky above the Lubyanka Square in Moscow during a prayer service to the Solovki new martyrs last Sunday.

"It was seen by all the people, who attended the Solovki Candle event on the eve of the feast of the New Martyrs and Confessors of Solovki, as well as by numerous police officers who guarded Lubyanka Square," action organizer Pavel Illarionov told Interfax-Religion on Monday.

Illarionov reminded Interfax that the goal of the prayer meeting was to obtain the permission of the Moscow municipal and Russian Federation authorities to erect a commemorative cross near the Solovki Stone, and to build an Orthodox chapel to commemorate the victims killed during the repressions of the 20th century.

"Some people doubted that such a thing could happen, but I said: 'Soon you'll see it with your own eyes.' But even I did not expect a sign in the sky to appear just several minutes after the prayer to the new martyrs began," Illarionov said.

According to him, the cross was seen during 20 minutes of the prayer service, then the clouds concealed it. Professor Pavel Florensky, a grandson of the renowned martyr, speaking after the prayer service said that no matter what rational explanation this sign may have, "for a believing heart this miracle needs no comment," and it made him believe that the Orthodox cross and church-chapel will be opened on Lubyanka Square very soon.

The Solovki Candle action was dedicated to the 90th anniversary of the establishment of the first Soviet concentration camp on Solovki Islands. Participants chanted "Memory Eternal" to all who "suffered the severe trials of Solovki islands and other places." A Youth Pilgrimage of the Russian Church Abroad to Take Place in July
A youth missionary trip to Solovetzki Monastery will take place July 6-16, 2010. The young members of the Russian Orthodox Church Outside of Russia will spend six days on the Solovki islands along with a group of students from the Orthodox Saint Tikhon’s Theological University helping the brethren, completing various obediences, attending church services and learning about the history of the monastery.
×