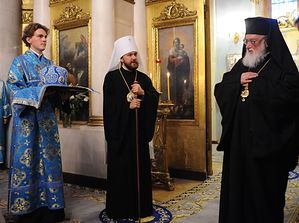 On 27 August 2010, the eve of the Dormition of the Most Holy Mother of God, Metropolitan Hilarion of Volokolamsk officiate at the All-Night Vigil at the church of the “Joy of All Who Sorrow” Icon in Bolshaya Ordynka Street in Moscow.

Concelebrating were Metropolitan Kallistos of Diokleia, a vicar of Archbishop of Thyateira and Great Britain (Patriarchate of Constantinople), president of the “The Friends of Mount Athos” charity society, clerics of the church, and a well-known Swiss theologian, Hieromonk Gabriel (Bunge) who became Orthodox before the divine service.

Many parishioners worshipped at the church together with the members of “The Friends of Mount Athos” representing Great Britain, the USA, Greece and other countries. The object of the society is to promulgate knowledge about monastic tradition and the Holy Mountain and, promote restoration of the monasteries there, and to attract pilgrims. The delegation is on a visit to Russia with the blessing of His Holiness Patriarch Kirill of Moscow and All Russia. The pilgrims venerated holy sites in Uglich, Kostroma, Yaroslavl, Rostov the Great, Nizhniy Novgorod, Gorodets, Kalyazin, and the Laura of the Holy Trinity and St. Sergius.

After the divine service, Metropolitan Hilarion addressed his archpastoral words to the worshippers, congratulating them on the feast of the Dormition of the Most Holy Mother of God. He said: “Today we glorify her Dormition and contemplate our life and death. Our life on the earth should be full, spiritual and divine, while our death should not be a tragic event, but a natural passing to life eternal; it should be dormition, rather than death.

By her tomb that emanates grace, peace and love, the Most Holy Mother of God testifies that the mortals can pass from death to life, from sin to grace, from human life to divine life.

The Church believes that the Mother of God never sinned even in her thoughts. We are sinful people, but the way to the Heavenly Kingdom is not closed to us. This way leads through death that could become Dormition in case we live in accordance with the commandments of God and pray to the Lord and His Most Precious Mother to grant us shameless and peaceful death leading us to life eternal.”

“I greet you not only as a hierarch and an outstanding theologian, but also as my teacher and friend. I wish you a blessed stay in Russia and God’s help in your archpastoral ministry and scholarly work. May He keep you for many and good years.”

Metropolitan Hilarion presented Metropolitan Kallistos with a mitre made at the workshops of the Moscow Patriarchate. 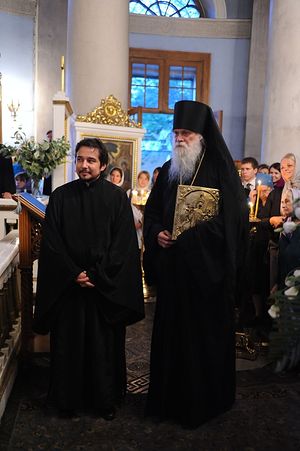 The DECR chairman cordially greeted Hieromonk Gabriel (Bunge) who has lived a solitary life in the Swiss mountains for over thirty years. Metropolitan Hilarion said to him, “Your have been a Catholic, but an Orthodox deep in your heart. Today, before the All-Night Vigil, you have become Orthodox, thus naturally completing a long spiritual path.”

While congratulating Fr Gabriel on this move, Metropolitan Hilarion presented him with an icon of the Mother of God called “Joy of All the Afflicted” to which the church in which Fr Gabriel joined the Orthodox Church is dedicated.