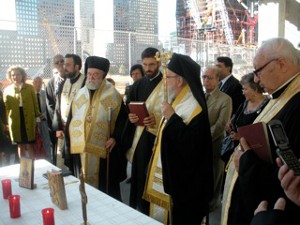 On the second weekend of September 2010, Orthodox Christian faithful across North America and beyond offered special prayers in remembrance of those who lost their lives in the September 11, 2001 terrorist attacks.

In New York, His Eminence, Archbishop Demetrios of the Greek Orthodox Archdiocese of America, celebrated a Memorial Service at the site of the former World Trade Center.

Representing His Grace, Bishop Michael of the OCA Diocese of New York and New Jersey at the service was Igumen Christopher [Calin], dean of Holy Virgin Protection Cathedral on New York's lower east side. [In the weeks and months immediately following the attack on the World Trade Center, the cathedral's clergy and faithful had been deeply involved in ministering to attack victims and local fire department personnel and their families.]

In his comments after the Memorial Service, Archbishop Demetrios emphasized that this is a day on which we remember the innocent victims who died, and that we should not allow the significance of the day to be overshadowed by any other issues or interests. He read from the Wisdom of Solomon, 3: 1-7.

Also present at the service were His Grace, Bishop Savvas; Father John Romas, pastor of Saint Nicholas Church, which was destroyed when World Trade Center Tower Two collapsed [see related story at www.oca.org/news/2238]; five priests of the Greek Orthodox Archdiocese, and numerous laypersons, some of whom had lost family members in the attack.

Members of the police and fire departments, as well as representatives from the embassies of Greece and Cyprus, also were in attendance.

In Moscow, the annual Memorial for the Innocent Victims of Terrorism was celebrated at the OCA's Representation Church of the Great Martyr Catherine.

Archimandrite Zacchaeus invited His Excellency, Mr. John Beyrle, Ambassador of the USA to the Russian Federation, to address the gathering at the conclusion of the service. Also invited to address the faithful was Alexander P. Torshin, First Deputy of the Chairman of the Federation Council of the Russian Federation, and Senator Sergei E. Sheblygin, President of the Saint Andrew the First Called Foundation and the Center for the National Glory of Russia, who attended in the absence of Vladimir I. Yakunin, Chairman of the Board of Trustees, who annually attends the service.

Following the service, Archimandrite Zacchaeus led everyone in ringing the bell that hangs in the memorial bell tower erected in honor of the 9/11 terrorism victims.

A photo gallery of the service may be found at www.st-catherine.ru/index.php?set_lang=eng&sitepartid=8&id=266&level=0, while a video is posted at www.youtube.com/watch?v=hrW86NJtGOc. 9/11 Tragedy A Solemn Reminder Of Need To Be Prepared Against Disaster
"Our nation's emergency responders – firefighters, law enforcement officers, and paramedics do an incredible job of keeping us safe, but they cannot do it alone." Orthodox faithful in USA commemorate 9/11 victims
On September 11, 2011, the day when the Church remembers the Beheading of St. John the Baptist, Archbishop Justinian of Naro-Fominsk, administrator of the Patriarchal Parishes in the USA , celebrated the Divine Liturgy at St. Nicholas’s in New York.

Moscow believers pray for victims of 9/11

Moscow believers pray for victims of 9/11
Last Saturday, clerics of the Moscow St. Catherine Church, where the Representation of the Orthodox Church in America is located, conducted a requiem for victims of terrorist attacks in New York on September 11.
×