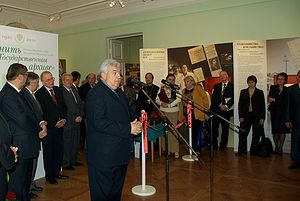 On September 17, 2010 the Russian Federation State Archives and the Holy Trinity Orthodox Seminary in Jordanville exchanged microfilm copies of historical documents during the Archives’ 90th anniversary celebration in Moscow. Eminent politicians and scholars, as well as representatives of the Russian Orthodox Church and foreign dignitaries participated in the festivities.

Head of the State Archives, S. V. Mironenko, addressed the gathering with a welcoming speech. “On this day 90 years ago the Archives Department of the National Education Committee of the Russian Federation signed a decree, which started the history of our Archives”, Mr. Mironenko said. He noted, that the Archives’ history was not easy. On this anniversary there came out a book, which “contains a detailed account of the Archive’s history, cites documents and, what may be of greatest interest, the recollections of its employees.”

Deputy Minister of Culture A. E. Busygin read the greeting from Russia’s President D. A. Medvedev to the staff of the Archives. The message pointed out that the State Archives of the Russian Federation “is rightfully considered to be a national asset and one of the largest collections in the country.” “You have been entrusted with invaluable documents without which the study of our country’s history, the development of a science, culture and education would be impossible, - the statement said, - It is important that you not only safeguard Russia’s historical and cultural heritage but also actively popularize it.” The president also praised the devotion and the exceptional professionalism of the Archives’ staff.

Vice-chairman of the Moscow Patriarchate’s External Communications Department archpriest Nikolai Balashov read the greeting from the Most Holy Patriarch of Moscow and All Russia, Kirill. Congratulations were also offered by head of the Federal Archives Agency A.N. Artizov, adviser to the Chairman of the State Duma of the Russian Federation N. A. Sakharov, a representative of the Russian Federal Finance Department S. M. Shakhrai, director of World History Institute of the Russian Academy of Sciences academician A. A. Chubarian, the first assistant to the general director of ITAR-TASS news agency M. S. Gusman and others.

After that head of State Archives S. V. Mironenko and dean of Holy Trinity Orthodox Seminary archpriest Vladimir Tsurikov exchanged copies of several documents. Among those transferred to the seminary are copies of official documents of the Synod of the Russian Church Abroad (1921-1945), which were offered in exchange for copies of several document collections held in the seminary archives pertaining to V. K. Abdank-Kossovskii (1885-1962), P.N. Krasnov (1869-1947), S.V. Denisov and others.

Dean of Holy Trinity Seminary archpriest Vladimir Tsurikov noted in his speech that “the Russian State Archives and Holy Trinity Seminary have enjoyed warm relations for quite some time now. They resulted in the exhibition devoted to Metropolitan Antonii (Khrapovitskii) held in Jordanville in 2006, as well as another exhibition dedicated to the life and memory of Princess Vera Konstantinovna in 2007 in Pavlovsk. Today's exchange is consequently a logical continuation of this collaboration.” In conclusion of his speech, the dean expressed hope that future relations between Russian State Archives and Holy Trinity Seminary will continue to be fruitful and will lead to an enrichment of archival funds of both Russia and the Russian diaspora.

The anniversary program included the opening of an exhibition titled “Storing in the State Archives” and the new official website of the State Archives of the Russian Federation, which contains about 3 million titles of documents stored in the Archives. The exhibition, which will last until November 28, consists exclusively of archival materials divided into 23 topics in the 19th and 20th century history of Russia. Among those are “The prophesies of Saint Seraphim of Sarov from the Secret Police files”, “The Grand Dukes’conspiracy. 1916”, and “Patriarch Tikhon’s legacy.” Bishop George of Mayfield: “Church Life Isn’t Black and White”
Tatiana Veselkina, Bishop George (Schaefer)
I spent my entire life charged with various duties, and I was surprised, especially in the early days of my appointment, that I needed to be honored by other clergymen and laity, and that some felt fear at the presence of a bishop. So becoming a bishop was a revelation to me, and I had to adjust to this way of life.