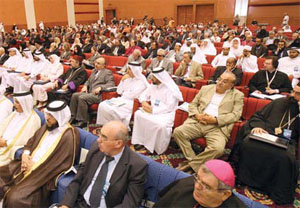 he 8th International Conference on Interreligious Dialogue opened in Doha, Qatar, on 19 October 2010. It was convened with support of Emir of the State of Qatar, Sheikh Hamad Bin Khalifa Al-Tani.

Taking part in the Forum are Christians, Muslims, and Jews from different countries of the world.

The Conference was opened by the Minister of Justice of Qatar, Hassan Bin Abdulla Al-Ghanim. He underscored its importance for peaceful relations among nations.

The Forum will continue its work till October 21 and discuss such themes as family as basis for future generations, family values, role and responsibility of the educational institutions in passing traditional values to the new generations, religious values in school curriculum, influence of the mass media and new technologies on the youth, and many others. Russia's Interreligious Council calls on authorities to protect spiritual leaders from attacks
Russia's leading religious organizations have called on the state to protect the clergy due to the recent increase in the number of attacks against clergymen.

Saint Hilarion (Troitsky). The Unity of the Church and the World Conference of Christian Communities
This brilliant defense of traditional Orthodox ecclesiology by the Holy New-Martyr Archbishop Hilarion — who received a martyr's crown on December 15th, 1929 —, does not seem to be well known, probably owing to its limited publication decades ago by a small monastery press in Canada.
×