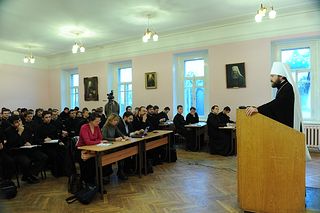 On November 1, 2010, Metropolitan Hilarion of Volokolamsk, head of the Moscow Patriarchate’s department for external church relation, read a lecture on relations between Orthodoxy and Catholicism at Moscow Theological Academy and Seminary as part of the course on External Church Relations taught by DECR staff beginning from this academic year.

His Eminence pointed to the priorities in relations between the Russian Orthodox Church and the Roman Catholic Church at the time of Vatican II.

‘As you know, East and West made up one Church for the first ten centuries of Christianity in spite of the fact that there were certain differences in theology and liturgical practice. The Church in East and West was united. The developments which took place in the mid-11th century led to a sad division between Christian East and Christian West. Those were events of ecclesio-political nature, but there were also a number of other factors including disagreements on various points in the doctrine and church practice. In the subsequent almost ten centuries of our separate existence, these differences grew considerably and today they are quite substantial in various areas of theology and church life’, he said.

During the second millennium up to the mid-20th century, the key point in relations between Orthodoxy and Catholicism was the notion of heresy, the DECR chairman said and explained, ‘The Orthodox looked at the Catholics as heretics, and the Catholics looked at the Orthodox as heretics. Therefore, any talk on cooperation and the rule of co-existence in a particular territory was out of question’.

A stable improvement in the relations between the two Churches has become visible in the recent years with the election of Pope Benedict XVI in 2005. According to the DECR chairman, there is a need today for dialogue between the Russian and the Roman Catholic Churches for defending Christian values in the secular world. Both the Orthodox and the Catholics seek to defend traditional views on the family, bearing and raising children and to protect the integrity of marriage. They believe abortion to be a sin and euthanasia unacceptable. ‘We should develop this cooperation regardless of successes and failures of the theological dialogue’, Metropolitan Hilarion believes. Metropolitan Hilarion attends a meeting of the Joint Theological Commission for Orthodox-Catholic Dialogue’s drafting committee
Metropolitan Hilarion of Volokolamsk, head of the Moscow Patriarchate’s department for external church relations, with the blessing of His Holiness Patriarch Kirill of Moscow and All Russia, attended a meeting of the drafting committee of the Joint Theological Commission for Dialogue between the Russian Orthodox Church and the Roman Catholic Church, which took place from June 15 to 17, 2011, in Rethymnon in the Island of Crete, Greece. SCOBA representatives participate in Orthodox-Catholic unity conference-- Unprecedented document produced
On October 2, 2010, the website of the Standing Conference of the Canonical Orthodox Bishops in the Americas (SCOBA) posted a summary of The North American Orthodox-Catholic Theological Consultation held at Georgetown University, Washington, DC.