On National Unity Day, a pannikhida will be served for victims of revolution and civil war 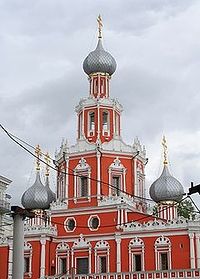 In the Moscow Church of the "Sign" in the Sheremetev Court on November 4, National Unity Day in Russia, a pannikhida (requiem) will be served in memory of those who died during the 1917 revolution, the civil war, and other tragedies in Russia during the twentieth century, reports Interfax – Religion.

The service will be lead by the head of the Synodal department for Church and society relations, Archpriest Vsevelod Chaplin.

The descendents and successors of some of the famous figures of both "white" and "red" armies are expected to attend the pannikhida.

Among them are: the chairman of the Congress of Russian Compatriots, Count Peter Sheremetev, the head of the Russian Assembly of the Nobility, Prince Gregory Gagarin, Chancellor and head of the Russian Imperial House, Alexander Trubetskoy, chairman of the "Russian World" and "Politics" funds, Vyacheslav Nikonov, and the descendents of Marshal Semion Budyonov, Ivan Konev, and others. A sermon by Arichimandrite Tikhon (Shevkunov), given after the pannikhida on Radonitsa
Archimandrite Tikhon (Shevkunov)
Once an ascetic of the Kiev Caves Lavra went on Pascha day to the famous caves where hundreds of monks are buried, and, from his abundance of Paschal joy, exclaimed, “Christ is risen!” “In truth He is risen!” came a brotherly, jubilant response. It was a greeting from another world, from the reposed monks abiding in the coffins of the caves; citizens of the Heavenly Kingdom. A Pannikhida is Planned for the Oldest Russian Military Cemetery in Germany
There is a small town named Weingarten in the Baden-Wurttemberg region of southern Germany, north of the Bodensee (Lake Constance). Not far is a small forest which locals have called “Russian” for over 200 years.
×