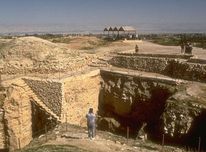 Russian archeologists have conducted the first excavations in the Holy Land since Russian research of Christian antiquaries in Palestine stopped in 1917.

"Here we have discovered a complex of Byzantium buildings that dates back to 6-7 centuries. Perhaps, it is remains of a monastery with multicolored mosaics," director of the Archeology Institute and corresponding member of the Russian Academy of Sciences Nikolay Makarov said at a press conference on Wednesday.

Excavations in Jericho were organized by the Russian Presidential Administration in connection with building Russian museum and park complex and yard facelift.

As Patriarch Kirill of Moscow and All Russia had earlier said, Russian Cultural Center in Jericho will become "the first major project in the Holy Land in the third millennium that was actively taken up by the Russian state." The center will be completed in the nearest future. What lies beneath: Sinai’s hidden texts
he Greek Orthodox monks of St Catherine’s monastery in Sinai have been accumulating manuscripts and books since the sixth century, making their library the world’s greatest repository of early medieval writing after the Vatican. The collection is even richer than it first appears, because many of the 3,300 ancient manuscripts contain hidden text and illustrations older than their visible contents – and a large scientific effort is under way to reveal and record them.

Russian Cultural Center in Jericho to open in January