Lives of Saints for Young People 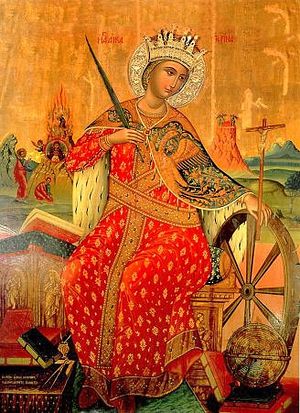 Late in the third century there lived in Alexandria a girl whom none could surpass in beauty and intelligence. St. Katherine was born into a wealthy pagan family and received an excellent education. By the time she was 18 many young men desired to marry her, but St. Katherine refused them all, feeling they were not good enough for her. Not knowing what to do, her mother – a secret Christian – turned to her spiritual father for help. He immediately understood that the wise girl’s heart would be won over by Jesus Christ. He told her that he knew of a wondrous Youth Who surpassed her by far in all her talents and gifts. By birth He was higher than any emperor or king; His wisdom was above understanding; His wealth was spread throughout the world, and His beauty outshone the very sun. At once St. Katherine wished to see this Youth. The monk brought out an icon of the Holy Virgin holding the Christ Child; he told St. Katherine to take it home and pray to the Mother of God.

After praying fervently that night, St. Katherine fell asleep and dreamt that she was standing before the Virgin and Child. The Child’s face was turned away from her. When His mother asked Him to look at the beautiful girl, He said He wouldn’t until she changed her pagan ways and returned to the holy monk for guidance. Eagerly St. Katherine did so. The monk taught her about the One True God, the Creator of Heaven and Earth, and the Saviour of Mankind. St. Katherine soon believed in Jesus Christ with all her heart and was baptized.

Once again she saw the Holy Virgin in a dream; this time the Christ Child was smiling at her with love and tenderness and said that He would now be “the Bridegroom of her soul.” As a sign of His love and mercy, He placed a ring on the finger of her right hand. When St. Katherine awoke, she found the ring on her finger!

Soon after this, the Emperor Maximian came to Alexandria and arranged a huge pagan festival. Amidst the slaughter and stench of the burning sacrifices, St. Katherine in all her beauty and eloquence denounced the pagan gods. She challenged the Emperor to invite his best philosophers for a debate in which her living God and Lord Jesus Christ would triumph over his dead idolatry. The Emperor agreed. Fifty philosophers gathered for the debate, but not one could match the Saint’s wisdom. Instead, St. Katherine convinced them to believe in Christ. The enraged Emperor ordered the 50 men to be burnt to death. As they went to their martyrdom, they begged St. Katherine to pray that the One True God would forgive their former ignorance, and she assured them of God’s infinite mercy and love. When the fire died down their dead bodies were found unharmed by the flames. Many people were converted through this miracle.

Disturbed by her growing influence over his subjects, the Emperor offered St. Katherine wealth and power if she would sacrifice to his gods, but she was not interested. Then he resorted to threats and vicious floggings. All of this the Saint suffered without a murmur. She was then locked in a dungeon without food or water.

Together with the head guard Porphyrius and 200 of his men, the Emperor’s wife Augusta secretly visited St. Katherine. So taken were they by her eloquent wisdom and courage that she was able to win them over to Christ. Even when the Saint warned the Empress of her martyrdom in three days, the fear that Augusta first felt – knowing only too well her husband’s cruelty -- was overcome by the consolation of God’s everlasting peace and love so freely given by the young woman.

The next morning, when St. Katherine was brought before the Emperor, he was astounded by her radiant beauty. Accusing his guards of giving her food, he would have punished them had St. Katherine not stopped him by saying that it was Christ Who had taken care of His faithful servant. When the angry Emperor tried to frighten her with threats of disfiguring her beauty, St. Katherine calmly replied that all human beauty wilts like a flower and soon fades like a dream.

Was there nothing that could shake her faith in the One True God? It was no dream that a friend of the Emperor next suggested; it was a cruel, inhuman torture. He proposed that the saint be strapped down between four huge spiked wheels – two would turn to the right and two to the left, slowly tearing her body to shreds. It took three days to build. When St. Katherine was shown the monstrous construction, she turned to her tormentors and said: “Why do you waste your time? I have told you, I believe in Christ.” She was immediately tied down between the wheels, but before they could be turned, an angel appeared and freed her bonds. The wheels shattered into bits, striking dead many unbelievers who were watching. Others, seeing this astonishing miracle, cried out: “Great is the God of the Christians!”

When the Emperor still did not stop in his madness, his wife stepped boldly forward: “In truth, you are arrogant and stupid to fight the Living God.” At these words the Emperor’s wrath turned against Augusta and she was beheaded. That night Porphyrius and his men reverently buried her body. The next morning they confessed their faith to the Emperor and they too were beheaded.

Crowds of people followed St. Katherine to the place of her execution weeping and sorrowing that she was to meet such an early and cruel death. However, the young saint told them they should rejoice for her because she was soon to see her beloved Bridegroom and Saviour Jesus Christ. St. Katherine was given a moment to pray and then she was beheaded. From the wound, instead of blood, there flowed milk.

St. Katherine’s body disappeared. According to the report of a number of faithful people, it was taken by angels. Two centuries later some monks were guided by a dream and found her body on the highest mount in Sinai. Not far from there a monastery was dedicated to her, and there her relics are kept to this day. Their sweet fragrance reminds us that Great Martyr Katherine, as a beautiful flower plucked form the earth, continues to bloom with unfading glory in God’s everlasting Kingdom.

(Translated and compiled by Vera Pronenko and Katherine Mansur) 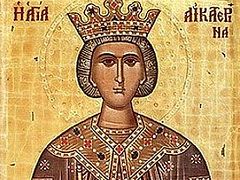 The saint who is venerated by both Catholics and the Orthodox 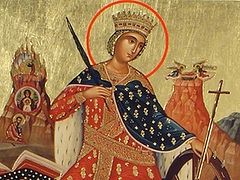 Holy Great Martyr Catherine
Metropolitan Anthony of Sourozh
And to her also occurred what we read today in the Gospel passage appointed for her commemoration day; about what will happen when the end of time approaches: There will be wars and rumors of wars, earthquakes, people will rise up against people, nations against nations; hatred will possess thousands of people… 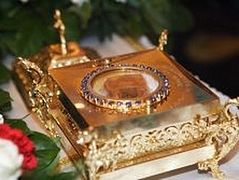 Relics of Great Martyr Catherine brought to Moscow, prayers throughout the night