DECR chairman: Patriarch Alexey’s life was dedicated to Church from beginning to end 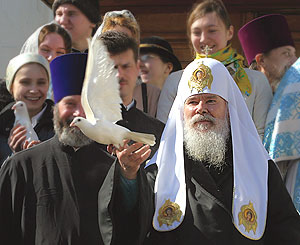 After the Divine Liturgy on December 5, 2010, at the church of the Mother of God, Joy of All Who Sorrow-in-Ordynka, Metropolitan Hilarion, head of the Moscow Patriarchate’s department for external church relations, conducted a commemoration service for His Holiness Patriarch Alexey II who died on this day two years ago.

Addressing the congregation, His Eminence Hilarion said in particular:

“I remember very well the morning of December the 5th, 2008. At that time I was bishop of Vienna and Austria. In two week’s time Patriarch Alexey was to come to Austria for a pastoral visit, and since that visit had been prepared well in advance I had talked with the Patriarch over the phone or in personal meetings almost every day. We met for the last time in Munich five days before he died.

On December the 5th, I was to ring him up at 10 in the morning Moscow time, that is, at 8 Austrian time. Patriarch Alexey had a direct line known only to a few people, and he himself would take the receiver. I dialled it, but unexpectedly a woman’s voice responded. It was one of the nuns who worked at the patriarchal residence. I gave my name and asked whether I could talk to the Patriarch, and she asked me to call back in thirty minutes. And in thirty minutes the same nun said that His Holiness had just died and burst out crying. His death was not announced yet; nobody knew about it; nobody expected it because we had seen him alive and well only a few days before when he served at the cathedral of the Russian Church Outside Russia in Munich.

The day of one’s birth and death is determined by the Lord Himself. We will never know why a particular person was born on a particular day, why he lived at a particular time and he died at this, not at that time. The life of His Holiness Patriarch Alexey from his early childhood to his last day was dedicated to the Church, and each of us can follow the example of his life.

His Holiness Patriarch Alexey embarked on the path of service for the Church of Christ in his youth. He began his service as an ordinary priest at an ordinary Estonian parish. Not long ago I had an occasion to visit that parish and to see the modest conditions in which the Patriarch to be began his ministry. Later, still as a very young man, he was elected as bishop and for many years he was chancellor of the Moscow Patriarchate. For over twenty five years he was the ruling bishop of the diocese of Tallinn and Estonia, then for a few year he governed the metropolia of Leningrad, and during the Local Council in 1990, in which I participated as a delegate from the diocese of Vilnius and Lithuania, he was elected Patriarch of Moscow and All Russia.

He served as Patriarch for almost twenty years. During those years, the life of our Church and the countries under our canonical jurisdiction changed so much that we can say together with His Holiness Patriarch Kirill that Patriarch Alexey left behind a Church quite different from that which he had taken in his hands. He took it exhausted after seventy years of persecution and oppression. Its revival only began. In 1988, when the Millennium of the Baptism of Russia was celebrated and the Church began to be talked about for the first time, churches continued to be blown up elsewhere in the country. Recently I have been to a city in Ukraine in which a church was blown up for the last time precisely in 1988. Such was the Church assumed by His Holiness – weakened, not numerous, exhausted by persecution and oppression.

For the time of his patriarchal office, the situation changed radically as the Church came out of the underground, out of oblivion. She is present today in all spheres of public life; there is an unprecedented growth in the number of churches, monasteries and theological schools. Suffice it to recall that by the end of the 1980s the Russian Orthodox Church had only 18 monasteries, while today there are over 800, and this at a time when the interests in Christianity is alleged to be weakened, when young people are alleged to lose interest in the Church. And who are those who inhabit these 800 monasteries? Are they not young monks and nuns? Who are applicants to theological seminaries and academies, Orthodox universities and institute? Are they not young people?

His Holiness Patriarch Alexey was a visible and significant figure. All our society, all our country knew him. He had many wonderful qualities. He might not be a brilliant personality outwardly, not a brilliant preacher, but everyone who was in contact with him, who worked with him, know how profound was his wisdom and knowledge about all that concerned church life. For all the years I was in contact with him, I do not remember a single occasion when I had to explain anything to him. When I came from England, Belgium or Austria to tell him about church affairs, he seemed to know beforehand whatever I was going to tell him. He gave precise answers; he remembered everything about the affairs of his dioceses. Once when I began telling him about the restoration of St. Nicholas’s in Vienna, he asked, ‘But you have another church in the Central Cemetery in Vienna, the church of St. Lazarus. What is the situation there?’ And I thought there were some 150 dioceses in the Russian Orthodox Church at that time and from several dozens to several hundred churches in each, and the Patriarch knew the situation in them in such a detail.

He dedicated all this energy to the Church; he had no private life, and perhaps he died not because of an oversight but because he liked to be alone in the evening and at night, not allowing anybody to come near so that at least at night he could be plunged in prayer and thoughts about God.

Remembering the commandment of the apostles: Remember your leaders (Heb. 13:7), today, on the day of the demise of His Holiness Patriarch Alexey, we remember him as our mentor, as a man whose memory will ever stay in the hearts of the flock and pastors – all the faithful of the Russian Orthodox Church. Today we sang ‘Eternal Memory’, and we look at his radiant image as an example of life in virtue, the life of a man who gave all his resources and thoughts to the accumulation of not material but spiritual wealth. May God give us to follow in the footsteps of His Holiness Patriarch Alexey and the present Patriarch Kirill, imitating them in faith, devotion, daring prayer and absolute commitment to the cause and glory of God. Amen”. First monument to Patriarch Alexiy II unveiled in Moscow
On February 23, 2013 the authorized representative of the Ukrainian Church on matters of higher education and science, Archimandrite Viktor (Bed) took part in the enlarged session of academic council of the National Medical-surgical N.I. Pirogov Center (Moscow), arranged for unveiling of the first monument to his Holiness Patriarch Alexiy II—the first honorary doctor of the Pirogov Center Message of His Holiness Patriarch Alexy of Moscow and all Russia on the occasion of the 60-th anniversary of the victory in the Great Patriotic War
Patriarch Alexei II of Moscow and All Russia
One past unites us, and we must be worthy of the selfless exploits of our fathers and grandfathers in the years of the war. We must not forget what the cost of our Great Victory was, and that we won it fighting shoulder to shoulder, so that our children and grandchildren lived in peace and friendship.
×