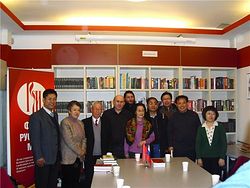 On December 21, 2010, at Beijing Foreign Studies University (Beiwai), the work by the famous Russian sinologist V. G. Datsyshen, History of the Russian Ecclesiastical Mission in China, published by the parish of the Holy Apostles Peter and Paul in Hong Kong, was solemnly presented to the university, the website Orthodox.cn announced in December.

The volume, written in Russian, is a continuation of a series of recent publications studying the history of Russia-China relations, especially in the area of spiritual and religious ties. The book's author, Professor V. G. Datsyshen , and publisher, Fr Dionisy Pozdnyaev (Hong Kong) were present at the event.

The book details the history of the Russian Ecclesiastical Mission in China, which inaugurated Chinese studies in Russia and laid the foundation of the Chinese Autonomous Orthodox Church. The mission also had a major impact on traditional Russian-Chinese friendship.

This edition is dedicated to the 60th anniversary of the consecration of the first Chinese hierarch, Bishop Simeon (Du).

Detailing the history of the Beijing mission using rare and unique archival materials, the author of the book offers the reader a look at the mission's continuous historical path—from its establishment by Peter the Great to the ultimate formation of the Chinese Autonomous Orthodox Church.

The preface to this edition tells the story about the problems of Orthodoxy in the modern Chinese world, its prospects and current issues. 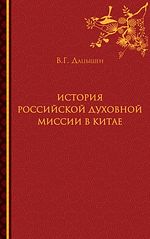 On December 22, Datsyshen's History of the Russian Ecclesiastical Mission in China was presented at the Russian Club in Shanghai.