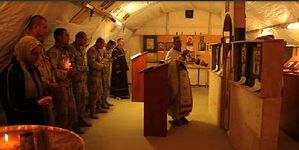 Archpriest Jerome Cwiklinski, US Navy Chaplain and a priest of the Orthodox Church in America, and an Orthodox chaplain from the Republic of Georgia, concelebrated the Divine Liturgy for the Great Feast of the Nativity of Our Lord for military personnel here on January 7, 2011.

In a video interview posted at http://www.dvidshub.net/video/105148/us-and-georgian-service-members-come-together-worship, Father Jerome, who serves with Marine Corps Forces Central Command, discusses the signifance of the event. It contains moving images of the Liturgy in addition to commentary.

As an aside, Father Jerome noted that "what goes around, comes around. In 1944, Saint Mary Cathedral, Minneapolis, MN contributed the first Orthodox priest to the Navy Chaplain Corps -- Father Alexander Seniavsky. Since World War II, the Orthodox Chaplaincy perpetuated from the legacy of Father Alexander to the present time and the Global War on Terrorism. Another spiritual son of Saint Mary’s, Lance Corporal Michael Memorich, was a recent beneficiary of that legacy, as I visited him in Afghanistan."

As reported on the OCA web site at http://www.oca.org/news/2349, Father Jerome and Priest Christopher, a National Guard chaplain and a priest of the Greek Orthodox Archdiocese of America currently deployed to Afghanistan, provided coverage in Afghanistan's northeastern region in December and January.