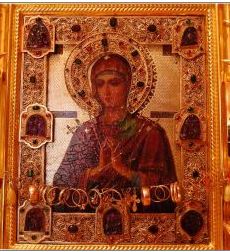 From February 14-March 4, 2011, the myrrh-streaming Icon of the Mother of God “Softening of Hardened Hearts” will visit the Diocese of Australia and New Zealand of the Russian Orthodox Church Outside of Russia. The icon was brought from Russia on the eve of the feast of the Meeting of the Lord, and will travel to Russian Orthodox parishes and monasteries of Sydney, Melbourne and Brisbane, where it will be offered for veneration.

Further information on the miracle-working icon can be found at: http://www.spasinas.ru/