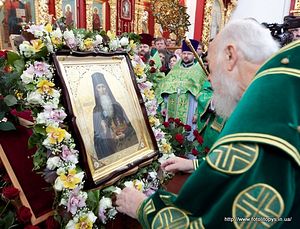 On February 20, 2011, on the Sunday of the Prodigal Son, His Beatitude Metropolitan Vladimir of Kiev and All Ukraine presided over the solemn canonization of Abbot Boniface (Vinogradsky) (+ December 27, 1871), the founder of the St. Panteleimon Monastery in Feofania (Kiev) and ascetic of piety, reports Patriarchia.ru. Abbot Boniface is now a locally canonized saint of the Ukrainian Orthodox Church.

Divine Liturgy and the glorification were celebrated in the cathedral church of the monastery.

Abbot Boniface (Vinogradsky) was born in 1785 in Cherson Province. He attended the village school, was taken into military service, and participated in the battles of 1812 and of later years.

Having left the military, he and his wife ran their rural property, but soon he gave half the property to his wife, the other half to the Church and the poor, and went to Kiev in hopes of joining a monastery.

In 1854, he was tonsured a monk, and in 1856, he was ordained a hierodeacon. In 1861, he was appointed to build the Feofania Skete (now the St. Panteleimon Monastery), which was attached to the Monastery of St. Michael.

Fr. Boniface gathered significant funds for the renewal of the church in his native land; in the Monastery of St. Michael he built a new church and guesthouse; in Feofania he restored the church and the bishop's house, he built two guesthouses, a new stone building, a wall and a bell tower. He was known for his ascetic life, and spiritual counsel.

St. Boniface will be commemorated on December 27/January 9.