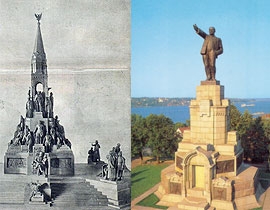 The head of Russia's Romanov Imperial House, Maria Vladimirovna, favored the idea to rebuild the memorial chapel to commemorate the 300th anniversary of the House of Romanov in Kostroma.

"I think the reconstruction of the memorial chapel will put the historical record straight and put an end to violations of Christians' religious feelings," the Great Duchess says in an answer to the letter from architect Yevgeny Yefremov.

In his letter with a copy sent to Patriarch Kirill, Yevgeny Yefremov recalled that the church had been founded in 1913, but the construction had been left unfinished. Lenin's monument was later put up in its place.

According to Yefremov, the upcoming 400th anniversary of Romanov's Imperial House may be celebrated by "restoring of chapel's initial religious purpose".