The Orthodox Christians of Japan ask for prayers 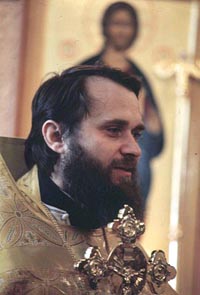 "When the earthquake began, we were in church; the service had just started, and despite the strong shaking, we continued the service. We prayed even more earnestly, for we knew what was happening," related Fr. Nicholai. "The main task for us now is to help those who need help, and to avoid mass panic. People are worried, people are in fear, but everyone is trying to keep a grip on themselves. There is no hysteria…. What will happen next, no one knows. I know only one thing—we need to put our whole soul into prayer. I ask you, dear brothers and sisters and all the world to pray for us sinners."

Fr. Nicholai said that there have been daily molebens served in all the Orthodox Churches of Japan for the suffering people.

According to Bishop Seraphim of Sendai and Eastern Japan, no contact has yet been made with Priest Vasily Taguchi, who serves in a house church located at the epicenter. It is not known if he is still alive.

The Orthodox Church in Sendai was not damaged by the Tsunami, but there has been no contact with the parishioners, reported Priest Clement Kodama in an e-mail to Archpriest Dionisy Pozdnaev, the rector of the church of the Apostles Peter and Paul in Hong Kong.

The Orthodox church of the Annunciation of the Mother of God in Yamada-ho was destroyed as a result of the Tsumani and fires, reported Priest Stephan Uchida in a letter to Fr. Dionisy Posdnayev.

Tokyo suffered significantly less destruction than Sendai and the situation is calm, but the shelves of all the grocery stores are empty, and a strict warning is out to stay indoor with the windows closed due to danger from radiation that might leak from the nuclear power plant.