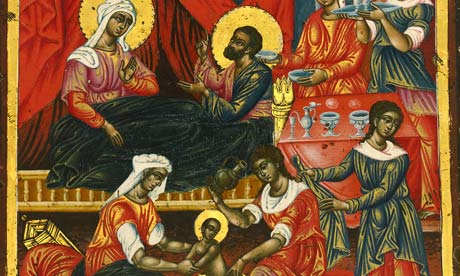 Birth of the Mother of God, one of six pieces stolen from Greek places of worship. Photograph: Helena Smith
Six stolen icons discovered in an art gallery near the Greek embassy in London have become the focus of a police inquiry as Athens tries to unravel how the religious works ended up on the international art market.

The magnificent pieces, painted over 200 years ago in typical Byzantine fashion, adorned Orthodox monasteries and churches in remote northern Greece until they were snatched by thieves.

"We have indisputable photographic evidence of their existence and it goes without saying that we want them back," said police chief Dimos Koursilos, who heads the country's art squad. "All of them were reported stolen in the last decade," he told the Guardian.

The plundered art was revealed after a telephone call from a woman claiming to recognise one of the icons – a famous rendition of the Virgin – on the website of the Temple gallery in west London.

Further investigation showed that the immaculately preserved gold-edged painting was among six icons reported missing from Greece that the specialist was selling for up to £5,000 each.

Richard Temple, who owns the gallery and is acknowledged as London's foremost dealer in icons, said that when he bought them he had "absolutely no reason" to suspect they were stolen.

"I've been in the business for 51 years and I'm too well known as a gallery to take any risks at all," he said. "We are an obvious target. We had gone through the correct protocols, but one has to have a certain amount of trust as business is conducted in good faith. I know the seller – he is somebody I deal with and I think he, in turn, was duped."

Upon presentation of documentation showing them on display in Greece, the art dealer voluntarily gave up his rights to the icons last week. "They left last Thursday in the hands of Scotland Yard," he said. "It was very painful and unfortunate."

Athens has vigorously stepped up its campaign against the illegal art trade, homing in on the dealers, curators and collectors that are the source of demand. In recent years, it has sought repatriation of hundreds of looted works, including such masterpieces as the Parthenon marbles, on display at the British Museum, that date back to the 5th century BC. The J Paul Getty museum in Los Angeles has returned four prized antiquities under Greek pressure.

As part of the renewed efforts to crack the increasingly sophisticated underground market, electronic databases have also been updated. Around 150 icons, many revered as holy relics, have been listed as missing from unsupervised churches and monasteries around the mountainous area of Epirus in northwestern Greece.

"There has definitely been an increase in thefts of icons," said Nikos Manouris at the Epirus Prefecture, which compiled the catalogue with the help of concerned citizens. "But since we put up the database in February last year, there has also been a decline."

Recently, the online list helped police track down an icon that had found its way to an antique store in Athens' flea market.

Greek authorities say the discovery of the icons in London is further proof that an international network of dealers and smugglers are behind the thefts.

"This case raises more questions than answers," said Koursilos. "The gallery owner is being very cooperative but the fact remains that the right documents were missing and, what's more, never asked for. These icons are very valuable and they should never have left Greece without export permits from the ministry of culture. There is a lot of work still to be done before we find out the real story behind these thefts."