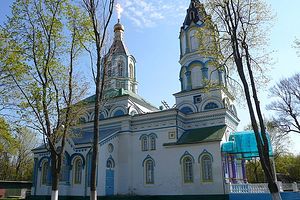 St. Elias Church in the Chernobyl exclusion zone.
Over the entire twenty-five years since the Chernobyl nuclear plant accident, radiation levels in the area of St. Elijah Church, the only church operating in the exclusion zone, was well below levels across the zone, Chernobyl disaster liquidators state.

"Even during the most difficult days of 1986, the area around the St. Elijah Church was clean (from radiation - IF), not to mention that the church itself was also clean," president of the Ukrainian Chernobyl Union Yury Andreyev said in a Kiev-Moscow video conference on Wednesday.

Now, the territory adjacent to the church has a background level of 6 microroentgen per hour compared with 18 in Kiev.

Andreyev also said many disaster liquidators are former atheists. "We came to believe later, after observing such developments which could be explained only by God's will," he says.

In particular, according to him, a few seconds after the explosion in the fourth unit of the Chernobyl PP, the cloud containing uranium particles started moving in the direction of Pripyat, a city located about 1,800 meters from the plant. There was a pine-tree on its way (it is featured on a well-known icon Chernobyl's Savior.)

"The cloud stopped short of this pine, divided into two parts by some unknown cause, and continued moving to the left and right sides of the city, instead of covering its residential areas. The radiation level in contamination areas was four or five roentgen per hour, and the city showed only half a milliroentgen," Andreyev said.