Pascha With Papadiamantis: Lessons from a Panegyrist 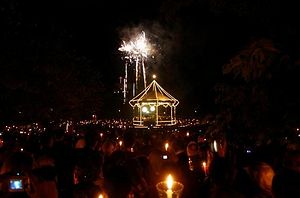 There are few opportunities like Holy Week to gain empirical knowledge and partake in the Philokalic (love of beauty) Hellenic tradition that masterfully comes to life each year in Greek Orthodox churches and homes all over the world. The Orthodox Christian mentality is expressed in our persistent focus on the Resurrection. While various creeds follow the Passion, and even honor it, they view it within the narrow prism of “The satisfaction of God's divine anger,” and their churches remain silent after Good Friday. In the Orthodox Church, the Holy Passion is venerated, because it illuminates what is to come; because the faithful know that after the Cross comes the Resurrection! This was and will remain the good news that Orthodoxy preaches to the world. It’s this very “good news” that Greek tradition has sought to identify itself with. Since ancient times, Hellenism has stood out for its ability to “organically digest” new elements and incorporate them into its existence. It is no surprise that it lends its full passion and grace and abilities towards glorifying the greatest of all such elements: the voluntary self-sacrifice of the Incarnate God and His subsequent Resurrection, to save mortals from death. Famous Greek author Alexandros Papadiamantis (widely known as the Dostoevsky of Greece) – whose 100-year memorial anniversary is being widely commemorated this year – describes Holy Week most eloquently in so many of his short stories and articles: “… the incense drifts in blue fragrant wreaths and forms a fleeting surround for the girls, in their embroidered aprons and white sleeveless jackets, come bearing armfuls of roses and violets and sheaves of rosemary and proceed to heap mountains of flowers on the humble Epitaphios, which needs no further embellishment.” In her blog This Side of Glory, the author Grace discusses this beautiful short story (A Village Easter), noting, “Who doesn’t know what he means? The liturgical worship we have looks so serious to our Protestant friends that they never guess how very human it can be — laughter and tears and all the rest that are forever tinged in my memory with the most sacred and eternal aspects of worship.”

In an article on Pascha, Papadiamantis compares the joy that the Church feels over the feast of Pascha to an inexplicable “inebriety” that a bride feels upon regaining her groom. “The Greek people feel this sublime drunkenness in their hearts more than any other people. No other Christian holiday holds that place that Pascha holds for them. The Westerners have Christmas. We have Pascha. It is the queen of all holidays and the feast of feasts.” He goes on to note that “the Greek nation’s Pascha rises and sets with the noisy dispersion and supreme exultation of the people, who still have drops of blood running in their veins from their wild and unbridled ancestors, who are lulled by the love of freedom.”

Papadiamantis notes that, “When the Greek people say the word Resurrection, a secret chord is struck in the depths of their heart, reminding them of the Resurrection of the nation as well, and Christ and Country meet together, equally suffering and equally divine. And when the Greek people say the word Love (Agape), they are speaking the sweetest of words, preeminently underscored in the Gospel and proclaimed in the teachings of St. Paul, which has remained in the Greek language as the quintessential passionate and heartfelt word, by which every affection, and every romantic feeling, and every devotion are expressed. Nothing is separated in the Greek tradition. That’s why the Crucifixion cannot be seen separately from the Resurrection. That’s why there’s no place for Puritanism in Orthodoxy. Pascha is a combination of sublime hymns, prayerful devotion, drama, as well as fireworks, dancing, celebrations, delicacies, and local traditions that vary from village to village and parish to parish. Pascha encompasses our lives – and for one week, it becomes our life, pointing to a more perfect way of living. Papadiamantis sums it up the best: “For my part, as long as I live and breathe and am of sound mind, I will never cease, especially during these resplendent days, to praise and adore Christ, to depict nature lovingly, and to represent with affection those customs which are authentically Greek.” Christos Anesti!