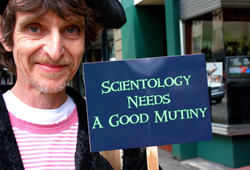 Gerry Armstrong
On May 18, St. Tikhon’s Orthodox University will host a meeting with Gerry Armstrong, former personal secretary to Ron Hubbard, founder of an American totalitarian sect, the ”Church of Scientology”. Since leaving the sect, he has devoted his life to aiding the victims of this destructive cult.

After entering the sect, Gerry Armstrong rose to the elite circle that completely controls the lives of ordinary members. He received a special assignment to compile the official biography of cult founder Ron Hubbard. As he gained familiarity with authentic documents while working on the biography, Gerald became convinced that the entire Scientology empire is based on lies and exists solely for the sake of money and world domination.

The sect’s leadership first tried applying to him to the standard practice of “re-education”, depriving him of contact with people and assigning him to hard physical labor in the company of other “offending” members of the sect. When Mr. Armstrong decided to finally break with the sect, he was subjected to every aspect of Scientology’s “fair game” doctrine, which is directed against the sect’s critics. To this day, he is unable to return home to the U.S.A., where Scientologists, using their lobbies in the country’s political and judicial system, had Gerry Armstrong sentenced to multimillion-dollar fines and imprisonment. Armstrong was forced into exile in Germany.

Despite repeated attempts on his life, Gerry Armstrong continues to reveal the true nature of Scientology, as attested by the documents he has preserved.

“Some of the details about me are inaccurate, but understandable and forgivable because of translations into Russian from the English language documents on my site, and common editorial errors. I will have the opportunity to correct the record during my talk at St. Tikhon’s University and during the rest of my trip to Russia.

“I was Hubbard’s Biography Researcher and Archivist in his Personal Office, not his personal secretary.

“Hubbard twice assigned me to Scientology’s re-education camps, the RPF, but this was before I became his Researcher and Archivist. I would have been locked up, and I believed killed, if the cult’s leadership had discovered I was planning to blow while on the biography project, but I successfully escaped.”