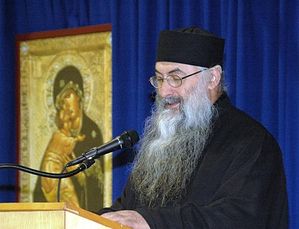 A well known author, retreat leader, and lecturer, Archimandrite Zacharias also will be awarded an honorary Doctorate of Divinity in recognition of his contribution to the spiritual life of the Church in America.

Archimandrite Zacharias' address, "Prophetic Life and Authenticity in the Church," will be broadcast live by Ancient Faith Radio [http://ancientfaith.com] and via live webcast at http://video.stspress.com/web-casts. As a faithful disciple of Saint Silouan the Athonite and the Elder Sophrony of Essex, Archimandrite Zacharias has inspired clergy and laity alike to seek to discover the inner life of the Orthodox Church, which distinguishes Christianity from every other faith and creed, and has at its epicenter the majesty of the Divine Liturgy and the dignity of the Person. For Elder Zacharias, following in the footsteps of Silouan and Sophrony, theology consists of learning how to attract and then preserve the grace of God, thereby rendering the human person an authentic image of Jesus Christ, the Alpha and Omega.