Vladimir Yakunin: Homosexuality is the same threat as environmental pollution 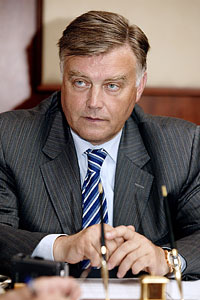 The head of the Council of Trustees of the St. Andrew the First-Called Foundation and JSC Russian Railways, Vladimir Yakunin, believes tolerance to homosexuality is harmful.

"I think traditional family values and childbearing should not be substituted with some notorious imitations invented by the homosexual propaganda which could be only arbitrarily called attributes of a democratic society," he said at the opening ceremony of the 15th World Russian People's Council held on Wednesday in Moscow.

Yakunin told that he wanted to address this issue in his speech delivered at the Berlin forum last year, but he was warned that "this country will hardly understand you; and you may have troubles here."

"Nothing of the kind. There was not a single protest made and not a single person left the room because I mentioned that the propaganda of homosexuality was the same pollutant for the social environment as other pollutants were for the natural one," he said.

Yakunin stressed that there is no chance for any modernization or innovation in a country "that has no human resources to pursue these things, because the education system provides its citizens with only scraps of knowledge of arithmetic and grammar, because education also involves personal development."