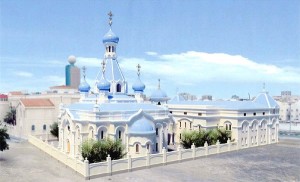 On June 2, 2011, the Ascension Day, the cupolas of the Orthodox church dedicated to St. Philip in Sharjah, OAE, were crowned with golden crosses. It is the first Russian Orthodox church to be built not only in the OAE but in the whole of Arabia. It is also the only church in the peninsula to be crowned with crosses.

Before installation, the crosses were blessed by the rector of the Russian parish, Hegumen Alexander Zarkeshev.

The five crosses and nine decorative stars covered with golden nitrite-titanic spattering were designed by architect Yuri Krista in Russia and brought to Sharjah by air.

This important event in the life of the Orthodox community in the OAE has become possible thanks to a special personal order of the emirate’s ruler, Sheikh Sultan III bin Mohammed al-Qasimi. Thus the final stage in the decoration of the Orthodox compound under construction has been completed. Along with the five-domed church of St. Philip, it includes a three-storey building of the Russian cultural and educational center.

The foundation stone for the future Russian religious and cultural compound in Sharjah was blessed, with the consent of His Beatitude the Patriarch of Great Antioch and All the East, on September 9, 2007, by Metropolitan Kirill of Smolensk and Kaliningrad (now Patriarch of Moscow and All Russia).

The Parish of St. Philip was established by mutual agreement between the Primates of the Russian Church and the Church of Antioch. It is under the canonical jurisdiction of the Patriarchate of Antioch which embraces Arabia. As is agreed, the church and the Russian community in Sharjah are served by a cleric of the Moscow Patriarchate.