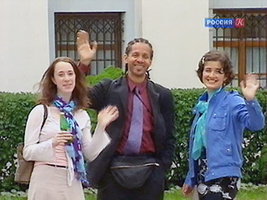 A group of church bell-ringers from Harvard University has arrived in Moscow to attend master classes led by the best Russian bell-ringers, reports the Voice of Russia.

This is the third visit following the return of the bells, which once belonged to the Danilov Monastery in Moscow, from the United States in 2008 .

The eighteen Danilov bells were cast between 1682 and 1907. In 1930, American philanthropist Charles R. Crane purchased the bells and donated them to Harvard.

Because of the university's reluctance to part with the bells, the two sides came to an agreement after long discussion that exact replicas of the eighteen bells would be made in Russia, and sent to Harvard. In 2007, the replacement bells were completed and shipped to the U.S.