Russian Orthodox Artifact to be Auctioned 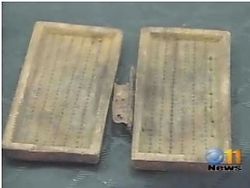 A local auctioneer will take bids next week on an antique calendar used by members of the Russian Orthodox Church in Alaska.

There are other wooden peg calendars still in existence, but primarily in museums, including the Smithsonian in Washington, D.C.

This one has been in the same family for well over a century.

Auctioneer Chuck Brobst says part of the pleasure he takes from his work is in the unexpected.

"You never know what walks through the door, or what's on the phone when the phone rings. You have no idea what you're getting."

A case in point: A small wooden box, which looks like a cribbage game, but is actually a Russian Orthodox calendar dating to the late 1800s.

"Every day they would move a peg one hole. You can see the circles and the crosses. These signify holy days in the Russian Orthodox Church."

Brobst plans to include the wooden peg calendar in an auction on June 26.

It's being sold by Sophie Phillips, whose family has had in their possession since the 19th century.

"From the research I've done, I believe it was 1899, according to the paper I have -- the death of my grandmother."

The calendar originally was used by Phillips' ancestors in the lower Kuskokwim region.

According to the chancellor of Alaska's Russian Orthodox Diocese, it was a common possession for parishioners of that era.

"I think the average lay person kept track of the feast days of the church,” said Father Michael Oleksa. “They celebrated Christmas, they celebrated other church holidays that are fixed on the calendar year. And they kept track of the holidays and then when it was their name day or the anniversary of the birth of a child, the name day of a relative, the death of a relative -- they had that all marked on their own personal calendars and could keep track of those dates just by moving a small peg from day to day."

Phillips says she did not do anything special to preserve the calendar. "I really didn't pay attention to that part because it was just handed to me by my sister, and I didn't think anything about it being antique or old, so I just kept it in a plastic bag, and showed it every now and then to other people."

But Brobst says it's valuable. "I could see 10,000 or more dollars if the right person -- a museum, a benefactor for a museum were to buy it -- to put on display at the Anchorage Museum."

He says the auction, which includes a variety of art from an estate sale by a Seward family, will be conducted mostly on-line, with a live webcam.

The June 26 auction can be accessed at www.northpacificauctions.com.