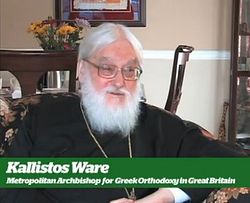 A recent interview with His Eminence, Metropolitan Kallistos [Ware], is now available online at www.christianitytoday.com/ct/2011/july/fullnesscenter.html, reports the official website of the OCA.

In the interview, Metropolitan Kallistos explains the reason for tension between the Russian Orthodox Church and Evangelical missionaries on Russian territory, talks about Orthodox missionary work in a historical context, and explains the essence of Orthodox witness.

A videotape of the interview, which includes several questions and answers that are not included in the printed interview, also is posted on YouTube as “Five More Minutes with Kallistos Ware.” It may be accessed at www.youtube.com/watch?v=pOC5MaCNqeY. In this post, the Metropolitan discusses the charismatic movement, the Orthodox witness, and Church and state.