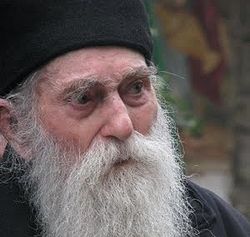 Archimandrite Arsenie (Papacioc), father confessor of Saint Mary Stavropegic Monastery in Techirghiol, Romania, reposed in the Lord on July, 19 2011, reports Basilica news agency, citing Trinitas Radio station. He passed away around 10:00 am, in the bosom of the monastic community who he counselled for 35 years.

Father Arsenie Papacioc had suffered for quite a long time from some cardiac and kidney diseases, for which he was hospitalised several times in the course of the last year at the county Emergency Hospital of Constanta. Archimandrite Arsenie Papacioc, one of the most important father confessors of contemporary Romanian Orthodoxy, was born in 1914. He became a monk as a young man, at Sihastria Monastery. He was abbot of Slatina Monastery, where he was arrested and taken to Suceava. After years of prison, in 1976 he settled at Saint Mary Monastery in Techirghiol.