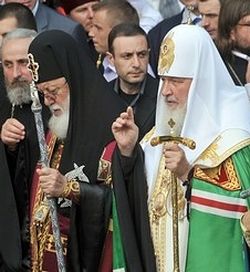 The heads of the Russian and Georgian Orthodox Churches have called for closer ties between the two Church communities.

"There has been such an intensive exchange of delegations between our Churches in recent years. With no other Church does the Russian Church have such intensive, brotherly contacts as it has with the Georgian Church," Patriarch Kirill said during a meeting with the Georgian Patriarch Ilia II.

The two top clerics met at the Kiev Monastery of the Caves on Tuesday.

"This is, of course, correct, because our states have quite difficult mutual relations," Kirill said.

"When ties between countries are weakening, ties between peoples who share the same faith and ties between Churches must become stronger. Times go by, political situations change, but peoples continue to live next to each other, and Churches stay around," he said.

Ilia expressed confidence that contacts between the Georgian and Russian Churches "will not be fruitless."

"It is true that politicians come and go and our peoples stay on, and so do the Churches. We must do everything possible to ensure that our relations are brotherly, friendly," he said.