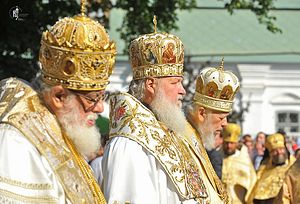 During his recent meeting with Catholicos-Patriarch Ilia II of Georgia, Patriarch Kirill of Moscow and All Russia stated that Abkhazia and South Ossetia are to remain the canonical territories of the Georgian Orthodox Church, reports Interfax – Religion. The Orthodox Church in Abkhazia has been troubled by separatism since its political secession from Georgia, and an uncanonical jurisdiction has formed.

"It is absolutely obvious that the territories of Abkhazia and South Ossetia remain within the Georgian Patriarchate's canonical jurisdiction," Patriarch Kirill told journalists after his negotiations with Patriarch Ilia II at the Kiev Monastery of the Caves.
Patriarch Kirill cited the, "certain canonical disorder" existing now in Abkhazia.

"This concerns both places, and the recent events in Abkhazia showed particularly that this canonical disorder causes damage to people's spiritual lives," he said.

"Having discussed the situation in an open and brotherly atmosphere," Catholicos-Patriarch Ilia II and Patriarch Kirill agreed to continue their dialogue "so as to approach some decisions in the future with God's grace, which should help the two Churches to pacify the lives of the Orthodox people in those places, reinstate canonical order and, what is the most important, prevent any schismatic actions obstructing the salvation of people's souls," Patriarch Kirill said.

Patriarch Kirill also said the two religious leaders also discussed inter-Orthodox relations, and were in agreement on these matters.

I thank God that we can speak unanimously on many issues now," he added.