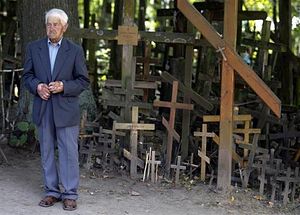 An elderly pilgrim stands by Orthodox crosses at the Holy Hill of Grabarka August 18, 2011/Peter Andrews
Some 15,000 Orthodox Christian pilgrims carried crosses, drank holy water and prayed on Friday at a hill in eastern Poland they believe to be sacred in a colourful celebration of their faith and identity in the overwhelmingly Roman Catholic country.

The pilgrims, who spoke a mixture of Polish, Ukrainian, Belarussian and Russian as well as local dialects, were joined on the Holy Hill of Grabarka by Polish President Bronislaw Komorowski, who called for closer ties between denominations.

“This festival is very important for us as it shows that Orthodox Christians are also ordinary citizens, not migrants or something,” Sister Hermiona, who is based at a local convent, told Reuters.

Orthodox Christians account for little more than one percent of Poland’s population of 38 million and are found mostly in the poorer, rural east of the country near the borders with Belarus and Ukraine.

The Holy Hill of Grabarka, believed to have saved people from a cholera epidemic in the 18th century, is the most sacred Orthodox site in Poland and every year draws crowds for the Transfiguration of Christ festival on Aug. 18-19.

On reaching a church perched on the top of Grabarka hill, many pilgrims, including the elderly, fall to their knees and shuffle around the small wooden building in an act of penitence. Some are clearly in pain, despite bandaging their legs.

“I have been coming every year for 22 years now. Back then, when I gave birth to my son, he was ill and spent the first three years of his life in hospitals. So when it was time to go to kindergarten, he didn’t really speak and that was a shame,” said Lidia Lukjaniuk.

“So I joined the pilgrimage,” she said, her eyes suddenly welling up. “I came back and he was speaking beautifully. He is 25 now. So I come every year.”

Lukjaniuk, who is in her mid-40s and from the nearby town of Siemiatycze, follows other pilgrims down to a stream to bathe her sore legs.

The pilgrims wash away the dirt, blood and scabs with tissues which they leave in a pile that will later be set on fire to symbolically erase the pain and suffering.

“We always take the water from this stream back home in bottles and the whole family sips some for breakfast throughout the year,” said Halina Brzezinska, 53. 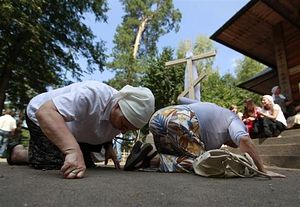 Pilgrims move on their knees at the Holy Hill of Grabarka August 18, 2011/Peter Andrews
“I started with the pilgrims when I was 10 with my mother. But I have no more strength now, so my daughter goes these days and all my grandchildren. And you know what? When you wash the scabs on your knees with the holy water after walking around the church there is no signs after a few days.”

Pilgrims bring symbolic votive crosses of all sizes and leave them on the hill every year, praying for health and other blessings or giving thanks for help or success already experienced.

“We have thousands of those crosses of wood and iron with prayers scribbled on them here on the hill,” said Sister Hermione.

“We take care of them, sometimes remove pieces of material that don’t resemble anything anymore, but we never move the crosses away,” she said.

Nuns from her convent of St. Martha and Mary, the first Orthodox one built in Poland since the war, take care of the hill, serve pilgrims and tourists and produce icons.

In his message to the pilgrims, Komorowski, the first Polish president to visit the site, evoked the ecumenical spirit of Polish-born Pope John Paul II, who died in 2005.

“The modern world requires that worshippers of various religions come closer together, and that is especially true for Christians,” Komorowski said.

“The Polish pope, John Paul II, said that Europe must breathe with the two lungs of Western and Eastern Christianity. The Orthodox church is an important part of our heritage here in Poland,” he said.

by Gabriela Baczynska in Grabarka, Poland