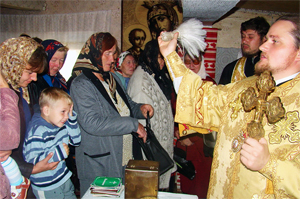 On September 26, 2011, the eve of the feast of the Exaltation of the Honorable and Live-Giving Cross of the Lord, in the town of Shostka (Suma Province, Ukraine) a schismatic community lead by a former "priest" of the so-called Kiev Patriarchate returned to the bosom of the Ukrainian Orthodox Church.

Bishop Joseph performed the rite of unification to the Orthodox Church. The members of the community confessed their loyalty to Christ's Church and renunciation of false beliefs and schismatic activities of the breakaway "Patriarch Philaret" of the Kiev Patriarchate (Mikhail Antonovich Denisenko, formerly Metropolitan Philaret of the Moscow Patriarchate), reports Patriachia.ru.

At the end of the rite of unification and consecration of the church of the Holy Trinity, the Divine Liturgy was celebrated, at which Bishop Joseph presided.

The ruling hierarch expressed his sincere joy over the return of the group of brothers and sisters in the faith from schism. "Schism and division is a wound and laceration on the Body of Christ, which the body of the Church is. But for Orthodox Christians the Cross is not a symbol of death, but a symbol of Life and Resurrection. And as in ancient Jerusalem the touching of the cross to a dead man returned him to life, so also a return to the saving bosom of the Church breathes life into a new Orthodox community."

The newly found sons and daughters of Christ's Church were able that day to confess and receive the Holy Mysteries of Christ together with other parishioners. All present at the service were given icons of the Savior and the Most Holy Theotokos, with an archpastoral blessing.