Cincture of the Holy Virgin delivered to Russia from Athos monastery 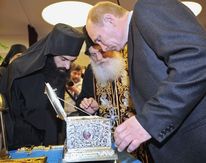 A delegation from the St. Andrew the First-Called Foundation delivered a reliquary with one of the greatest Christian holy objects-- the cincture of the Mother of God from Vatopedi Monastery on Mount Athos. The delegation arrived on October 20, at Pulkovo airport in St. Petersburg, where Prime Minister Vladimir Putin was present to meet and venerate the holy shrine, reports Interfax - Religion.

"One reasons we asked the Vatopedi Monastery to bring the cincture of the Mother of God to Russia is the demographic situation in our country. We think this shrine will arouse ad interest in the spiritual revival of our society, and in family values," the head of St. Andrew the First-Called Foundation and director of Russian Railways Vladimir Yakunin told journalists on Athos.

The shrine has left Greece for the first time in the history of its stay in the Vatopedi Monastery. About 20 Athos monks will accompany it in Russia.

The Father Superior of Vatopedi, Archimandrite Ephreim, said the monastery had earlier refused the request to bring the reliquary to other countries, for example to the USA, and Romania. An exception was made for Russia.

After visiting St. Petersburg, the shrine will be taken to other Russian cities. The last point on its journey is Moscow. The belt is to return to Mt. Athos on November 23.

For many years, Vatopedi monks have made small belts, blessed them on the belt of the Mother of God and spread among the believers. Usually they take a spool with 300 meters of ribbon, which is blessed on the reliquary with a special prayer. Then the spool is given to the monks, who divide the ribbon into 1.5 meter belts, wind them, and package them in plastic bags together with a text about the shrine and instructions on how to pray and observe the fasts.

The Orthodox believe that thanks to intercession of the Holy Virgin, these belts help cure female infertility, and help pregnat women give birth to a healthy child. Since the belt of the Mother of God is kept on Athos where women are not allowed, Russian women will now have a rare chance to kneel down before the shrine, pray that God grant them children, health to their relatives and friends, and prosperity to Russia.