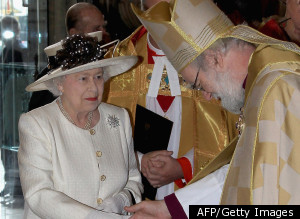 The service at London's Westminster Abbey paid tribute to the completion of the "Authorized Version" of the Bible, which took place in 1611, the BBC reports. The Duke of Edinburgh and The Prince of Wales also attended the ceremony, during which Archbishop of Canterbury Rowan Williams gave the sermon.

In his sermon, made available through the Anglican Communion News Service, Williams recognized the anniversary by speaking about his appreciation of this specific translation:

What is a good translation? Not one that just allows me to say, when I pick it up, 'Now I understand'. Of course, if I'm faced with a text in a strange language, I need to be able simply to read it; but a good translation will be an invitation to read again, and to probe, and reflect, and imagine with the text. Rather than letting me say, 'Now I understand', it prompts the response, 'Now the work begins.'

During the ceremony, a version of the Book of Genesis from "The People's Bible" was presented at the altar. This project features verses handwritten by more than 22,000 different people from across Britain. The book traveled through about 200 towns since June 19, the Christian post explains, before ending up at Westminster Abbey on Nov. 16.

The King James translation of the Bible was first ordered in 1604, with the finished piece being read aloud in the Jerusalem Chamber of Westminster Abbey in 1611, the UKPA points out.