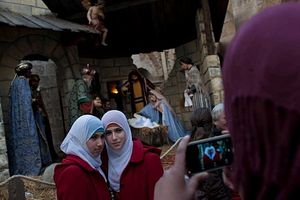 Tens of thousands of tourists and Christian pilgrims packed the West Bank town of Bethlehem for Christmas Eve celebrations Saturday, bringing warm holiday cheer to the traditional birthplace of Jesus on a raw, breezy and rainy night.

With turnout at its highest in more than a decade, proud Palestinian officials said they were praying the celebrations would bring them closer to their dream of independence.

Meanwhile, Christmas celebrations began to take place around the globe, with Pope Benedict XVI celebrating Christmas Eve Mass two hours before midnight at Vatican City and urging the faithful to look beyond the commercialization of the holiday and discover its true meaning.

"Let us ask the Lord to help us see through the superficial glitter of this season, and to discover behind it the child in the stable in Bethlehem, so as to find true joy and true light," Benedict told congregants in a packed St. Peter's Basilica.

Bethlehem, like the rest of the West Bank, fell onto hard times after the Palestinian uprising against Israeli occupation broke out in late 2000. As the fighting has subsided in recent years, the tourists have returned in large numbers.

By late night, the Israeli military, which controls movement in and out of town, said some 100,000 visitors, including foreigners and Arab Christians from Israel, had reached Bethlehem, up from 70,000 the previous year.

Thousands of Palestinians from inside West Bank also converged on the town.

"It's wonderful to be where Jesus was born," said Irma Goldsmith, 68, of Suffolk, Virginia. "I watch Christmas in Bethlehem each year on TV, but to be here in person is different. To be in the spot where our savior was born is amazing."

After nightfall, a packed Manger Square, along with a 50-foot-tall (15-meter-tall) Christmas tree, was awash in Christmas lights, and the town took on a festival-like atmosphere.

Vendors hawked balloons and corn on the cob, and bands played Christmas songs and tourists packed cafes that are sleepy the rest of the year. As rain began falling in the early evening, many people cleared out of the square and raced to nearby restaurants.

Festivities were to culminate with Midnight Mass at the Church of the Nativity, built over the grotto where tradition says Jesus was born.

Among the visitors were a surprisingly large number of veiled Muslim women with their families, out to enjoy an evening out in what is normally a quiet town.

"We love to share this holiday with our Christian brothers," said Amal Ayash, 46, who came to Manger Square with her three daughters, all of them covered in veils. "It is a Palestinian holiday and we love to come here and watch."

Israel turned Bethlehem over to Palestinian civil control a few days before Christmas in 1995, and since then, residents have been celebrating the holiday regardless of their religion.

Pilgrims from around the world also wandered the streets, singing Christmas carols and visiting churches.

"It's a real treat to come here," said John Houston, 58, a restaurant owner from Long Beach, California. "It makes me feel really good to see what I have been learning from the time I was a kid in Sunday school until today."

Houston said he was surprised by Bethlehem's appearance, which is a far cry from the pastoral village of biblical times. Today, it is a sprawling town of cement apartment blocs and narrow streets that combined with several surrounding communities has a population of some 50,000 people.

Located on the southeastern outskirts of Jerusalem, Bethlehem is surrounded on three sides by a barrier Israel built to stop Palestinian militants from attacking last decade.

Palestinians say the barrier has damaged their economy by constricting movement in and out of town. Twenty-two percent of Bethlehem residents are unemployed, the Palestinian Authority says. Israeli settlements surrounding Bethlehem have added to the sense of confinement.