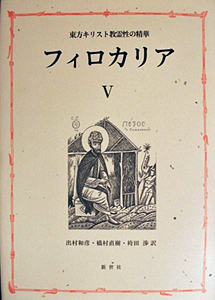 With the support of the “Japanese association for the study of Eastern Christianity”, publication continues of a Japanese translation of the Philokalia, reports Bogoslov.ru, citing Graecia Orthodoxa.

The Philokalia of St. Macarios of Corinth (1731–1805) and St. Nicodemos of the Holy Mountain 1749–1809) was first published in Venice in 1782. Since the 18th century, this collection has been the foundational work for all Orthodox spirituality, both Greek and Slavic. Since the time of publication of this book containing 1206 pages in the Greek original and representing over thirty authors, it has been printed in abridged forms and translated into various languages—most notably Slavonic, Russian, modern Greek, Romanian, English, French, and Italian.

Now a new translation can be added to the list. As Rei Hakamada has informed us, translation work was recently begun of the Philokalia into Japanese with the support of the “Japanese association for the study of Eastern Christianity” (東方キリスト教学会) led by Professors Hisao Miyamoto (宮本 久雄 -Univ. Sophia, Tokyo), Masaki Omori (大森 正樹 – Univ. Nanzan) and Riushiro Tani (谷 隆一郎 – Univ. Kyusyu). Many experts are working on the translation from Greek to Japanese, one of whom is Rei Hakamada (袴田 玲), a specialist in studies on St. Gregory Palamas.