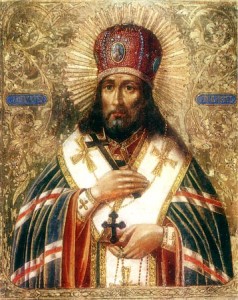 With the blessing of His Eminence Metropolitan Hilarion of Eastern America and New York and His Eminence Metropolitan Vadim of Irkutsk and Angara, the relics of St Innocent of Irkutsk will be brought to SS Peter and Paul Cathedral in Sydney on February 5, 2012, the feast day of the Holy New Martyrs and Confessors of Russia. The reliquary will be brought by Protopriest Evgeny Startsev and other clergymen of the Moscow Patriarchate.

The overwhelming majority of the flock of the Diocese of Australia and New Zealand of the Russian Orthodox Church Outside of Russia are from Harbin, Shanghai, Zabaikal and Trekhrechie and their descendants. St Innocent was the first bishop of the Russian Church assigned to China. In 1721, he was consecrated bishop of Pereyaslavl and assigned Head of the Chinese Ecclesiastical Mission, which was intended to tend to the descendants of the Cossacks taken prisoner by the Chinese who retained their Orthodox faith, the so-called Albazin Christians.

But the saint never reached China. In the ukase addressed to the Chinese government regarding his appointment, they carelessly called him “Grand Lord,” but since this was the title of the Chinese Emperor, he was refused entry. St Innocent then stayed temporarily in the city of Seleginsk, in the Zabaikal region, but as soon as it was discovered that he was refused entry to China, his wages were suspended. He lived with his entourage, moving from house to house, soon opening an icon-painting studio, while his aides caught fish to survive and even begged for alms. In 1722, he was appointed Bishop of Irkutsk.

The reliquary will be offered for veneration in the churches of the Diocese of Australia and New Zealand until February 19.

For more information on the schedule, see the website of the Austrailian and New Zealand Diocese.