Patriarch Kirill receives delegation of the Patriarchate of Jerusalem 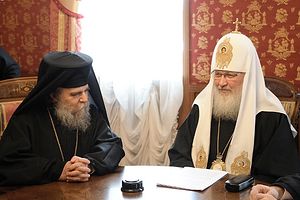 On March 14, 2012, His Holiness Patriarch Kirill of Moscow and All Russia met with a delegation of the Patriarchate of Jerusalem at the Patriarchal chambers of the Church of Christ the Saviour.

The delegation included Archbishop Aristarchos of Constantina, Archbishop Theophylaktos of Jordan and Archimandrite Stephanos (Dispirakis), representative of the Patriarch of the Holy City of Jerusalem and All Palestine to the Patriarch of Moscow and All Russia. Participating in the meeting were also Metropolitan Hilarion of Volokolamsk, head of the Moscow Patriarchate’s department for external church relations, Archpriest Nikolay Balashov, a DECR vice-chairman, Archpriest Igor Yakimchuk, DECR secretary for inter-Orthodox relations, and Fr. Stephan (Igumnov), a DECR staff member.

The Primate of the Russian Orthodox Church welcomed the guests, ‘envoys of the Mother of all the Churches of God – the Church of Zion, the Church of the Holy City of Jerusalem’.

Patriarch Kirill expressed solidarity with Christians in the Middle East, saying, ‘As a result of the destabilized political situation in the Middle East, scores of thousands of Christians have come to face a threat to their lives. These political developments have provoked an outflow of Christians from Middle East countries, and we look with great concern at these developments. We are grieved and disturbed by the reduction of the Christian population in the biblical region, including under the impact of the present political events. The Patriarchate of Jerusalem bears a special responsibility for the preservation of holy places and churches and for the preservation of the Orthodox faith in the Middle East. Please convey my words of support to His Beatitude Theophilos, Patriarch of Jerusalem and All Palestine’.

His Holiness shared remembrances of his first visit to the Holy Land in 1969. ‘I remember very well my first visit to the Church of the Resurrection and my prayer at the Lord’s Sepulchre and the talk I had after the liturgy with Father Daniel, who was a guardian of the Lord’s Sepulchre at that time. At that time, the very coming of a Moscow Patriarchate group to Palestine was an event both for the Church of Russia and the Church of Jerusalem. Father Daniel, who was to become a bishop, recalled stories about Russian pilgrims who used to crowd the Holy Land in the pre-revolutionary time’, he said.

According to Patriarch Kirill, pilgrimage is thriving today, including from the countries belonging to the canonical jurisdiction of the Moscow Patriarchate. ‘Again the number of pilgrims from Holy Rus amounts to tens and hundreds of thousands. Hundreds of thousands of our people, when in the Holy Land, learn the spiritual experience and share in the liturgical life of the Church of Jerusalem, thus becoming her children during their stay there. I believe it is the greatest achievement of our bilateral relations in the last years’, he stressed.

Patriarch Kirill also underscored that he attached a great importance to the work of the Moscow representation of the Church of Jerusalem and the Russian Orthodox Mission in Jerusalem, which maintain spiritual ties between the two Churches and represent their traditions in the canonical territory of the sister Church.

The head of the delegation Archbishop Aristarchos conveyed to Patriarch Kirill best wishes from Patriarch Theophilos of Jerusalem and All Palestine and from the Patriarchate of Jerusalem Holy Synod. ‘We convey to you the grace and blessing of the Holy Sepulchre of the Lord and the Bethlehem cave in which our Lord Jesus Christ was born in flesh’, he said.

Archbishop Aristarchos also thanked the Patriarch for the opportunity to worship at the grand service held on the occasion of his episcopal consecration and pointed to the importance of the talk he had that day with Metropolitan Hilarion of Volokolamsk during which they discussed bilateral relations between the Patriarchates of Jerusalem and Moscow.