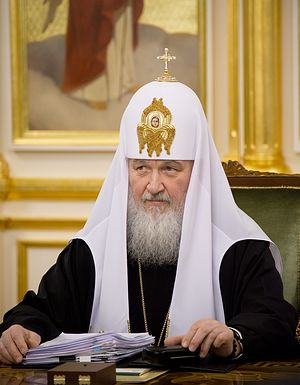 Photo: S.Vlasov
Patriarch Kirill of Moscow and All Russia depreciated the Punk Band action at the Cathedral of Christ the Savior.

"We have no future if we start mocking at great shrines and if some people consider this mockery a kind of bravery, an expression of political protest, an appropriate action or innocent joke," the Patriarch said on Saturday after a Liturgy in Moscow Church of Deposition of the Robe of the Holy Virgin.

The Primate confessed that his heart was breaking as there were people who "call themselves Orthodox" among those who justified this blasphemy and underestimated it.

The Patriarch called the incident the Devil's intrigues.

"Today all of us are going through the Great Lent. The Devil laughed at all of us, bringing so much sorrows on the days when we should depart from disturbances of this world, pray, restrict ourselves with fasting, repent in our own sins," he said.

The Patriarch supposed that this trial was sent to believers on the days of the Great Lent so that "all of us realize our responsibility for our Motherland, for the Holy Russia, for Orthodox faith."

He urged the whole Church "to sincere and ardent prayers for our country, for our faith, for our people, so that the Lord forgives us our sins, again extends His mercy to usso that passing through all temptations, we left them behind as purified, strong people capable to settle their future according to God's law and human conscience.