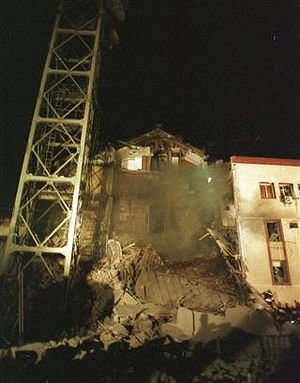 Marth 24 marks the 13th anniversary since the start of the NATO bombing campaign against Serbia, i.e. the former Federal Republic of Yugoslavia (FRY), which lasted 78 days and resulted in at least 2,500 deaths and more than 12,500 injuries.

The death toll among the military and police forces reached 1,031, while around 6,000 civilians were injured, including 2,700 children. The number of injuries among soldiers and police officers was 5,173, with ten or so people still missing.

The total damage was estimated at USD 100 billion at the time. NATO has never disclosed its losses.

The decision to attack the FRY was the first in history to be made without the approval of the UN Security Council, and the order was given to U.S. General Wesley Clark, the allied commander at the time, by NATO Secretary General Javier Solana.

Later on, in his book Waging Modern War, Clark revealed that the plans for the air strikes against the FRY were well under way in mid-June 1998 and completed in late August that year.

FRY was attacked under the pretext of failure of the talks on the future status of the province of Kosovo and Metohija, held in Rambouillet and Paris.

After the decision on non-acceptance of foreign troops was ratified by the Serbian parliament, which proposed the UN forces to monitor a peaceful resolution of conflicts in Kosovo, NATO launched air raids on March 24, 1999 at 7.45 p.m. CET.

The 19-member Alliance launched projectiles from ships in the Adriatic Sea, and four military bases in Italy, all with the support of strategic operators who took off from the basis in Western Europe and latter in the U.S. The first targets were barracks and air defence forces in Batajnica, Mladenovac, Pristina and other locations.

There is practically no city in Yugoslavia which was not targeted on a number of occasions during the 11-week campaign.

The bombing caused damage to 25.000 housing facilities and destroyed 470 kilometres of road and 595 kilometres of railway tracks. A total of 14 airports were damaged, as well as 19 hospitals, 20 healthcare centres, 18 kindergartens, 69 schools, 176 cultural monuments and 44 bridges, while 33 more were completely destroyed.

A third of the electric energy capacity of the country was destroyed, two oil refineries, in Pancevo and Novi Sad, were bombed, and NATO forces used for the first time the so-called graphite bombs to disable electrical power systems.

Facing mounting diplomatic pressure, NATO ended the bombing with the signing of the Military Technical Agreement in Kumanovo on June 9, 1999, three days after which the FRY forces began to withdraw from Kosovo and Metohija.

The NATO secretary general issued an order to stop the bombing on June 10, and the latest missiles fell on the territory of the village of Kokolec at 1:30 p.m.

On that day, the UN Security Council adopted Resolution 1244, and a total of 37,200 KFOR soldiers from 36 countries were sent to the province, with a mission to preserve peace, security and the return of several hundred thousand of Albanian refugees until the widest degree of autonomy for Kosovo has been defined.