It was barely 4 a.m. when 19-year-old Rinkal Kumari disappeared from her home in a small village in Pakistan's southern Sindh province. When her parents awoke they found only her slippers and a scarf outside the door.

A few hours later her father got a call telling him his daughter, a Hindu, had converted to Islam to marry a Muslim boy.

Only days later, Seema Bibi, a Christian woman in the province of Punjab, was kidnapped along with her four children after her husband couldn't repay a loan to a large landlord. Within hours, her husband was told his wife had converted to Islam and wouldn't be coming home. Seema Bibi escaped, fled the village and has gone underground with her husband and children. 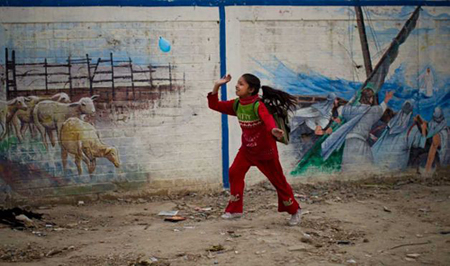 In photo taken Sunday, March 11, 2012 A Pakistani Christian girl plays with a balloon next to a wall with biblical paintings at the Christian colony in the center of Islamabad, Pakistan. Roughly five percent of Pakistan's 180 million people belong to minority religions, which include Hindu, Christian, Shiite Muslims and Ahmedis, according to the CIA World Factbook. (Anja Niedringhaus / AP)
Hindu and Christian representatives say forced conversions to Islam have become the latest weapon of Islamic extremists in what they call a growing campaign against Pakistan's religious minorities, on top of assassinations and mob intimidation of houses of worship. The groups are increasingly wondering if they still have a place in Pakistan.

"It is a conspiracy that Hindus and Christians and other minorities should leave Pakistan," says Amar Lal, the lawyer representing Kumari in the Supreme Court. "As a minority, we feel more and more insecure. It is getting worse day by day."

In the last four months, Lal said, 51 Hindu girls have been forcibly converted to Islam in southern Sindh province, where most of Pakistan's minority Hindu population lives. After Kumari disappeared from her home on Feb. 24, Azra Fazal Pachuho, a lawmaker and the sister of Pakistan's President Asif Ali Zardari, told Parliament that Hindus in southern Sindh were under attack by Islamic extremists.

Kumari's family has gone to the Supreme Court to get their daughter back. But the case is hotly contested by the Muslim family, who say Kumari's conversion was voluntary. They say the couple had known each other and exchanged Facebook messages and phone calls before she converted and they married.

On Monday, the Supreme Court ordered Kumari kept in a women's shelter in southern Karachi until it resumes hearing the case on April 18.

"Christian and Hindu girls are targeted more and more," says Father Emmanuel Yousaf, who heads the National Commission for Justice and Peace, an organization born out of the Catholic Bishop's Conference.

Yousaf, in the Punjabi capital of Lahore, said his group was helping Seema Bibi and a number of other Christians who had to leave their villages because of threats from extremists. Some of them were girls who were forcibly converted and others, he said, were falsely accused of acting against Islam for allegedly insulting the Prophet Muhammad or abusing the Quran.

There are dozens of cases of minorities being accused of insulting Islam under the country's controversial blasphemy laws. Often the cases are rooted in disputes with Muslim neighbors or as coercion to convert, and judges often feel intimidated by extremists into convicting accused blasphemers, said Yousaf. "They know where you live and where your children go to school," he said.

Roughly five percent of Pakistan's 180 million people belong to minority religions, which include Hindu, Christian, Shiite Muslims and Ahmadis, according to the CIA World Factbook. Ahmadis are reviled by mainstream Muslims as heretics. Over recent years, violence against the minorities has increased, as Islamic hard-liners' influence over the country has strengthened.

In May 2010 gunmen rampaged through an Ahmadi place of worship in Lahore, killing 93. In February this year, gunmen stopped four buses in northern Pakistan, picked out those with Shiite-sounding names and shot them to death, killing 18. Last year, a provincial governor who criticized the blasphemy laws was killed by his own bodyguard, and the government's only Christian Cabinet minister — also an opponent of the laws — was gunned down by militants.

"In Pakistan one's religious faith, or lack of one, has become sufficient to warrant execution and murder," Pervez Hoodbhoy, a physicist and peace activist wrote in a column earlier this month. "The killers do their job fearlessly and frequently."

The violence has cowed Pakistan's liberals and frightens even many Muslims.

"Extremism is a problem that is not just targeting the minorities. It is now a general problem in our society," said Ijaz Haider, whose Jinnah Institute's website carries an Extremism Watch documenting cases of attacks and intimidation by militants. "The liberal mindset has had a severe setback and the government has no strategy. It tries to do damage control, and damage control is to placate these groups."

Critics say the government is too afraid and weak to respond or in some cases is even complicit as it panders to extremist groups for votes.

A report released last week by Yousaf's justice and peace commission laid out a series of grim statistics about minority women in Pakistan. The study surveyed 1,000 women, three-quarters of whom said they had been sexually harassed at the workplace, discriminated against in schools or pressed by teachers to convert to Islam.

Yet they rarely complained. "They sense security in being silent as disclosing it might bring shame on themselves and their family," the report said.

Mohyuddin Ahmad, the information secretary for the Punjab Provincial government, says politicians and police are afraid.

"If you are killed by a terrorist, no one will come for condolences," he said.

Even incremental steps have to be taken slowly and silently so as not to ignite a firestorm by extremists, said Ahmad.

The provincial government has quietly sought to increase women's participation in the work force, he said. It requires that a third of the members on government corporations and boards be women; all government offices must have day care centers; 15 percent of all government jobs have to go to women; free land given to the poor is shared 50/50 by husband and wife; and acid throwing on a woman is now a terrorist act.

But incessant bickering among political parties, the judiciary, federal government and army have worked in extremists' favor of extremists, Ahmad said.

"The provincial governments and the federal government know they are the scum of the earth but we don't agree on strategy," said Ahmad. "We have no unity of command."