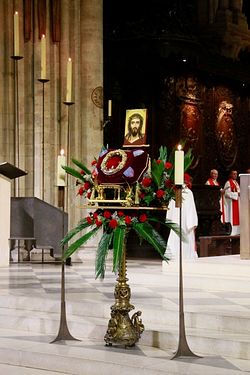 On March 30, the 5th week of Lent, a delegation of the Diocese of Chersonese, venerated our Saviour’s Crown of Thorns at Notre Dame. Bishop Nestor of Chersonese was accompanied by the rector and students of the Russian Seminary in Paris.

In the presence of Cardinal Andre Vingt-Trois, vicar bishops, priests and numerous worshippers, the Seminary’s choir sang the Praise to the Most Holy Mother of God from the 5th week of Lent’s Saturday service.

They venerated the Crown of Thorns as part of the Christian ‘Mission Métropoles’ which was held from March 30 to April 2 in Paris. The seminarians also took part in the events which took place on March 31 and April 1 in the square at Notre Dame, the Diocese of Chersonese website has reported.