Patriarch Kirill leads a prayer vigil in defence of faith, profaned shrines, the Church and her good name

On April 22, 2012, the Sunday of St. Thomas, after the liturgy at the Church of Christ the Saviour, a prayer vigil was held at its northern porch in defence of faith, profaned shrines the Church and her good name.

Before the prayer service, the ark with a piece of the Lord’s Robe and a Nail from the Lord’s Cross was brought out of the church together with several shrines which had been subjected to profanation, including the veneration cross from the Cathedral of the Intercession in the city of Nevinnomyssk near Stavropol, icons from the church of St. Prokopius the Righteous in Velikiy Ustyug near Vologda and the Icon of Our Lady of Kazan from the church of St. George the Victorious in Velikiy Ustyug, which had been shoot through by bullets in the 20s of the 20th century. 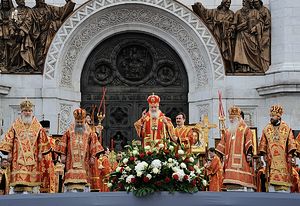 These shrines were carried in a procession with the cross around the cathedral and after that His Holiness Patriarch Kirill of Moscow and All Russia addressed the congregation.

Present at the service were A. Zhukov, first deputy chairman of the State Duma, and other officials, as well as Mr Legoida, chairman of the Synodal Information Department and mothers superior of stauropegial convents.

After the prayer service His Holiness Kirill delivered a brief homily: 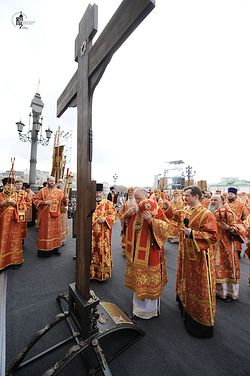 ‘I greet you all on the occasion of the saving Pascha of God. We have accomplished this solemn prayer service, this prayer vigil before God, looking at the icons bearing the stamps of defilement and before the greatest shrine of the whole Christendom, which is a part of the seemless robe of the Saviour and a nail with which He was nailed to the Cross.

‘I authorize that these icons should be never and in no circumstances restored. Let the marks of damage inflicted on them always remind us of the invisible battle each Christian should wage, first of all, with oneself, with his or her own sins, asserting the peace and truth of God in the world around us.

In conclusion of the prayer vigil, His Holiness called the faithful to sing the Creed ‘with one mouth and one heart’.

The prayer service was broadcast by the TV Center network and shown on numerous screens installed before the Church of Christ the Saviour.

Prayer services in defence of the faith were held that day in all the cathedrals of the Russian Orthodox Church in the territory of the Russian Federation.