Sunday of the Paralytic 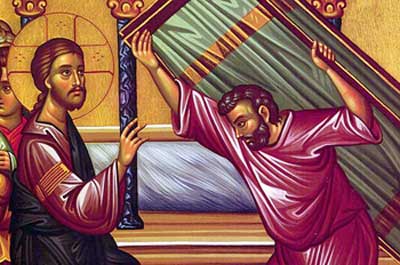 My dear brothers and sisters in Christ, today is the Sunday of the Paralytic. In today’s Gospel, we hear of a man that has been paralyzed for thirty-eight years. He has been waiting at the pool of Bethesda for the stirring of the waters by the angel so he can be healed. The man then encounters our Lord God and Savior Jesus Christ, who asks him if he will be made whole. The man then explains that he has no one to help him enter the water when it is stirred. Jesus then immediately heals him by saying, “Rise, take up your bed and walk.” This healing occurred on the Sabbath. The man then encounters the Jews, who are only interested keeping the law, who ask him why he is carrying his bed on the Sabbath. He tells them that the man who healed him told him to carry his bed. Upon further questioning, he tells them that he does not know who it was that healed him. Jesus finds him and then tells him to sin no more, lest something worse come upon him. The man then tells the Jews that it was Jesus who healed him. The Gospel then concludes with the Jews seeking to kill Jesus because he had healed this man on the Sabbath day.

The paralysis of this man prevents him from receiving God’s grace in the pool of Bethesda.This man suffers in loneliness because he has no one to help him. He understands that he cannot bring about his healing through his own efforts.

Many of us are like this man in that we suffer from physical ailments that keep us from doing the things that we want to do. Those of us that are less fortunate find ourselves with no one to help us, much like this man.

However, there is a deeper type of suffering that we can suffer. This type of suffering comes by many names. What it is, in reality, is a soul sickness that paralyzes the soul and keeps it from God and other people.

We can make two choices in our suffering. The first is to become angry because no one is helping us. The second is to patiently endure the suffering, looking for God’s mercy.

The wise person will examine his suffering to determine its causes. We are reminded by many examples in scripture of the various causes of suffering:

All too often, when we examine the causes of our sufferings, we try to find causes outside of ourselves. In short, we try to place blame on someone or something other than ourselves. This is because we do not want to look at ourselves, because we do not want to see our own selfish, self-centered behaviors that put us into conflict with others or caused us to abuse our own bodies. If we look honestly at our lives, we will find that some aspect of this type of behavior is the cause of all of our suffering, no matter how much fault we can find with someone or something other than ourselves as the cause of our suffering.

Selfish, self-centered behaviors are sinful behaviors. The question is, how long are we going to let sin bring us suffering? If we let sin run its course in our lives, it will bring us to death, both a spiritual and physical death. Saint Paul reminds us of this in his epistle to James: “and sin, when it is finished, brings forth death,” (James 1:15) or again in the epistle to the Romans, “For the wages of sin is death.” (Romans 6:23)

If we have become paralyzed because of our sin, we have reached a bottom where there is no one to help us, which is like there being no one to help the man in the Gospel. However, we all have someone who is all powerful and merciful, not only to help us in our paralysis, but to heal us of it. That one is our Lord God and Savior Jesus Christ. In other words, our sufferings bring us to God.

Thus, we should embrace our sufferings as a gift from God because they bring us to Him. The Holy King David reminds us of this when he says in the Psalms, “You, which have shown me great and sore troubles, shall enliven me again, and shall bring me up again from the depths of the earth. ….unto You will I sing with the harp ….My lips shall greatly rejoice when I sing unto You; and my soul, which You have redeemed.” (Psalm 70:20-23). Saint John Chrysostom further reminds us of this when he says, “Glory to God for everything,” as he was dying in exile, despised by the men of his day.

So, my dear brothers and sisters in Christ, my prayer for you is that you will be able to see your sins in your suffering and that, as a result, you may able to embrace your sufferings by coming to God and rejoicing in Him for them.