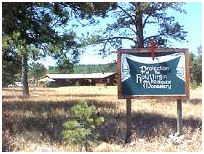 An institution of the Orthodox Church in America’s Diocese of the West, the monastery was evacuated on Sunday, June 17, 2012.

According to Mother Cassiana, acting superior, “over 450 acres are now involved in the blaze that is being fought by fire fighters from around the region.”

While the monastery remains untouched, prayers are requested that it might be spared, together with the countless residences scattered throughout the region.

Established in 1993, the monastery is home to several nuns who over the years have labored not only to establish a strong Orthodox community and witness in the area, but have built a physical complex that includes a beautiful chapel, quarters for the nuns, guest rooms, a bookstore, and a refectory.